« Sanity, Scales, and a Sweater | Main

Today I started the New Year healthy and strong.  I had a healthy breakfast, lots of water, some tea, did some yoga, and headed into town to run my very first 5K.  I was nervous, excited, and a little worried that I had lost my mind.

I probably have.  Who else thinks paying money to "get" to run around the city in -12C conditions is a good idea? 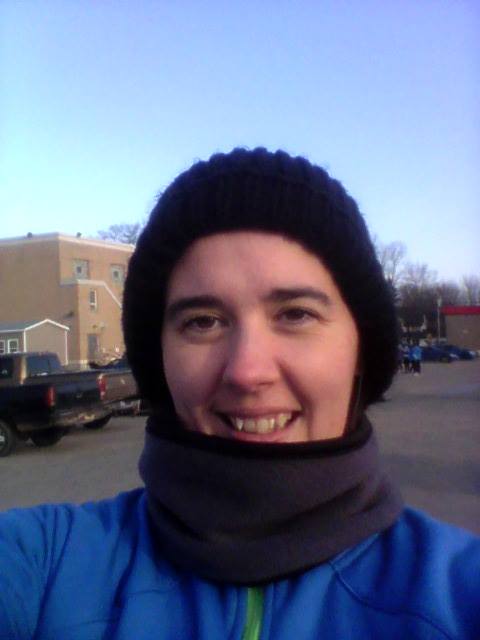 (before the race, trying to figure out the camera function of my tablet)

Apparently a fair number of other people thought this was a good idea, as there was a decent crowd.  Maybe 100+ people?  Most of us were wearing our souvenir jacket, and a few enterprising ladies had New Year's party hats.

Luckily for us all a warm front started moving in early this morning and we get a break from the loooooowww temperatures we've been enjoying.  The wind had died down to almost nothing, which made a huge difference, the sun was shining brightly, and the temp was on the way up.  I turned on my iPod, started at the back, and we were off.  I was worried at first because I felt like I was REEEEALLY slow compared to the other runners, but a lot of people dropped down to a walk after the initial start.  I tried not to worry about being passed or passing others and just focused on my own pace and form and it worked!  It was a great race and I felt amazing.  I clocked a personal best for me, at just under 37 minutes (in training 37:30 was the best I'd managed).  I feel like I could have gone a little faster and still been ok, but it was really important to me to run the whole thing and not have to drop down to intervals, and I did that, so I'm super stoked.  Maybe even stoked enough to sign up for another race?

Let's not get crazy.* 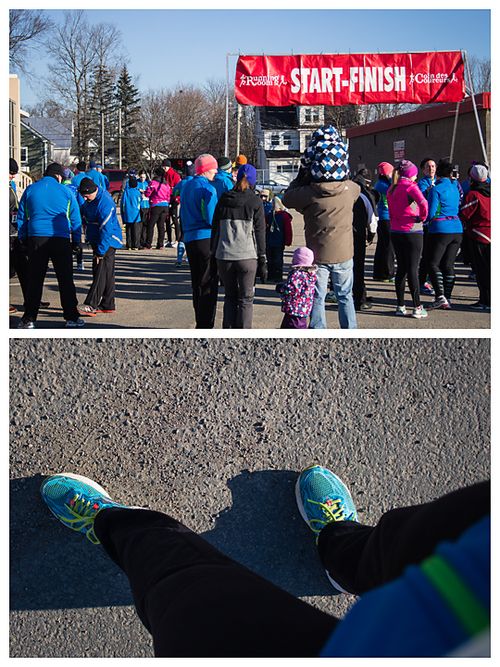 (The crowd at the finish line and my trusty kicks.  They've carried me far this year.)

Just for fun, I thought I'd share my run playlist for this race.  I compiled it with the help of jog.fm, which is an awesome resource for runners.  My first list was tracks at 150 bpm, which would have me running a 30 minute 5K, a good goal but just a bit too fast for me.  I dialed it back to 145 bpm and that was my sweet spot. 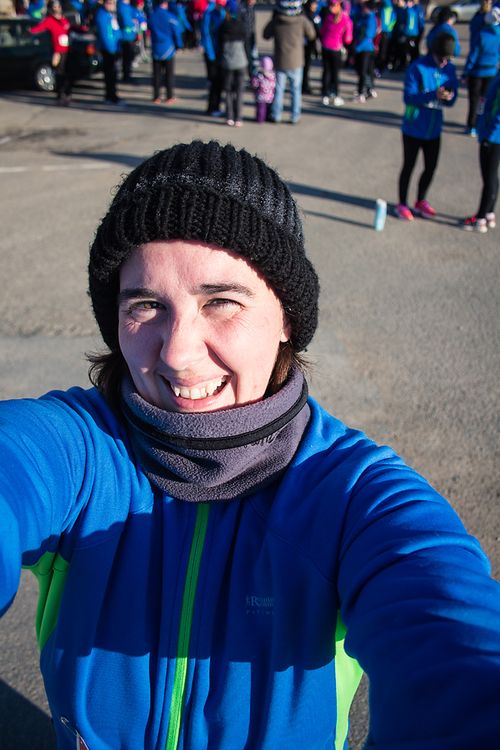 (after the race, after my cool down, after I've gone to the car for my camera...oh look, the frost is starting to melt off my hat)

**Race made possible by Podrunner Intervals, Halls, and Brooks Ravenna 5.

I feel like I was unbearably slow, but I did it! Yay, me! Slow and steady wins the race, right?