Sanity, Scales, and a Sweater

I was blessed with a good metabolism.

I was born a chunky, 9 lb, 7 oz baby and stayed pretty much a butterball until around First Grade, when I started finding some height.  After that I was all legs and sharp edges and klutzy awkwardness without end.  Adolescence was a time of being constantly hungry and eating whatever I wanted, seemingly without consequence.

I wish I'd enjoyed it more fully at the time.

Even my 20's, those University and baby making and nursing years, were just fine.   I ate what I wanted, or, when pregnant, what I knew from experience wouldn't be too horrific on the return trip (TMI? Sorry.).  Within 8 months of having a baby I was back in my skinny jeans and (mostly) keeping up with my funny little people. 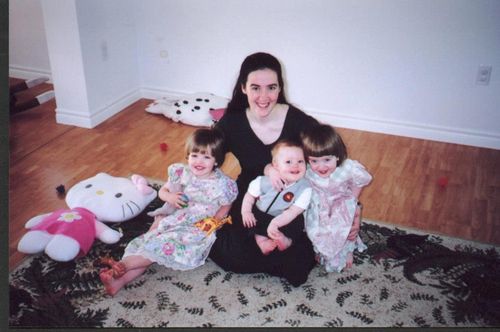 (Me and my babes.  This is the face I recognize.  Photo credit Carl Moeller.)

When I turned 30, I got a new body for my birthday, or certainly a new metabolism.   Shortness of breath when climbing stairs, all kinds of digestive issues, and, oh, look, 10 extra lbs by the time I turned 31.  The trend continued, 10 extra lbs every year, a little less energy, funny heart rhythms, guts in knots, fun without end.  The "bad back" I'd been mostly ignoring in my teens and twenties became worse and worse, until it got to the point where getting up from lying down took massive effort and not a little teeth gritting and tears.  Lifting heavy objects, certainly bending down to pick things up, was mostly out of the question.

I tried doing better; eating more fruits and veggies, cutting back on the junk (without eliminating it completely--life's too short!), getting chiropractic and massage when I could, doing light stretches, etc.  I'd actually been considered underweight by my doctor, so those first 10-20 lbs weren't a big deal, just a sign of aging...or something.

When we lost Gaelan I had already lost 20 lbs due to the joys of pregnancy, and I spiraled into a comforting hole of emotional eating.  I put the weight back on quickly and continued on my trend of an extra 10 lbs per year after that.  I found when I went to put my winter clothes on that they were all too tight.  Then my summer clothes were too tight.  Then my new winter ones again.   On my birthday last fall I stepped on the scale and saw a number that I knew I had been headed for but never actually thought I'd see.  I've been living in this body for a long time, and I honestly didn't think it was built for that.  I was 30 lbs heavier than I'd been even on the kids' birth days, and I wasn't going to be handed a sweet little baby.  I was shocked and dismayed and still slowly but steadily gaining weight. 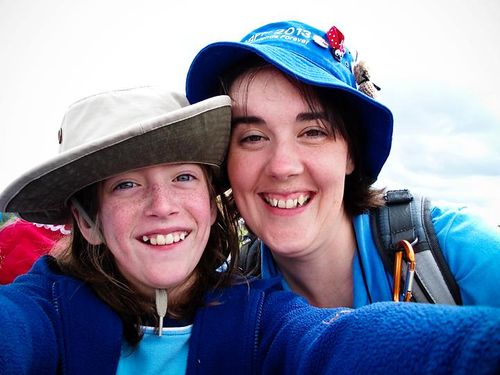 (Summer 2013.  Selfie with my Princess, but I don't really recognize myself.)

I outgrew my favourite sweater.  The fantastic grey cardigan that I'd only had for a couple of years, the one with the deep pockets that looked fabulous on me and was so cozy yet pretty.  I couldn't get my arms in the sleeves.  I try to be body positive, and I had been telling myself that a little extra weight didn't matter, but that sweater.  I tugged and I pulled and I wept, but that sweater was not going on my body and I felt its loss in a way I never expected to feel about a piece of clothing.

Plus, I was miserable.  Grief bound and blended with my life-long wrestle with SAD, which never really seemed to lift when the sun came back.  My back got worse and worse, though we did finally figure out that it was actually my hip causing the trouble, not my back.  The pain was definitely in my back though.  My digestive problems kept multiplying.  This time last year I was in a black hole of pain and misery I couldn't seem to penetrate.

By mid-January it all came to a head.  My depression was bad.  Really, really bad.  My energy levels were non-existent, and I was spending much too much time in the bathroom,  missing appointments and commitments to run back to the house for cramping and diarrhea.

Something had to change.

I made, for me, a huge step: I admitted that dairy and I weren't just bickering and poking at each other, but were perhaps in a very, very bad relationship.  I gave it up.  No dairy allowed!  It was actually only meant to be step one in an elimination diet, but after a week without dairy I was already spending less time in the loo, and a quick cheat would result in instant bloating, cramping, unbearable pain.  My body wasn't just talking, it was screaming, and I was finally ready to listen.

On February 28th, I woke up, early, to a strange feeling.  I actually laid in bed trying to identify it. 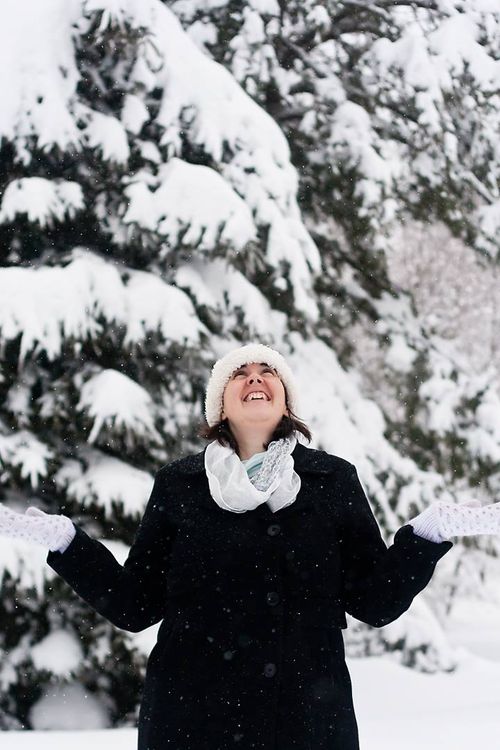 (Jan. 2015. Fake smile for the camera.  Miserable inside, and I could barely button my coat.  In fact, a button popped off right after this.  Photo credit Naoise Moeller)

The black dogs of depression had slunk off in the night, the clouds had blown away, the weight had lifted.  I woke up without anxiety, without dread, without the deep sadness that had been my constant companion for too many months and years.  It wasn't that I woke up happy, it's that I woke up with the capacity for happiness, and I'd almost forgotten what that was.

I didn't know how long it was going to last, but I wasn't going to waste an opportunity.   It was March Break, my children were home, and I had energy.  I decided I was going to use the opportunity to take care of myself.  I was going to go outside and be active every day; walking, snowshoeing, whatever, for at least 20 minutes.  I wanted to keep myself accountable, so I signed up for My Fitness Pal so I could keep track of what I was up to.  Since it was built in to the program, I figured I may as well give tracking food and calories a go, see if any more food allergies revealed themselves.

The kids went back to school and I kept getting outside, often with a kid in tow.   The Princess and I managed to scare each other silly a couple of times when we found coyote tracks near our path where we'd been snowshoeing the night before.   I started reintroducing an old love, yoga, back into my life, just a teeny bit every day.

That first month of tracking, I lost weight and gained it back.  I learned that the days don't balance out, that if you eat hardly anything for a couple of days and then binge the third day, the calories don't get averaged out over the week, not by your body.  My body, it turns out, had been in starvation mode for a long time.  Was still in starvation mode.  Was starving for me to take decent care of it.

Hubby and I went to a naturalpath, Mary Lou Firth-Irving, someone we'd felt drawn to when we'd attended the local Intuitive and Wellness Fair but had never followed through.  He told me it was our Christmas gift to each other.  It was more than that.  Her technique finally fixed my hip.  We first saw her near the end of March and the results were instant.  By mid-April they were wearing off for me, and when we saw her again end of April we dug in deeper and that was it.  Pain gone. Decades of pain, worsening over time, gone.  I went from weeping when I attempted savasana to relaxing comfortably into it (the first time, I still wept, but it was from the realization that there was no pain).

I signed up for an online yoga weight-loss challenge.  I kept walking.  I did daily yoga.  I got better about taking my vitamins, especially Magnesium and D, which I was way too low in.  Spring came and I signed up for a local Boot Camp.  I started C25K (again).   I started biking again, sometimes with Sweetpea, often on my own.  When I took the kids to the lake to swim, I jumped in and swam too, instead of monitoring their safety from the shore.  I finished Boot Camp, without any major incident.  Summer ended, and I joined the ladies group at the gym.  I finished C25K.  ME!

I started feeling better.  The lbs started going away.  One day I stepped out of the shower and spotted myself in the mirror and then started to smile.  "Hello", I said, "I've missed you".  I actually recognized my own face for the first time in a long time.  Other people started to notice too, and ask me what I was doing differently.  Just about everything is the answer.  Most importantly, I had the energy to have fun with my family again, to go rock climbing with the cousins and be silly with my campers and take a jog in the morning when the world is quiet. 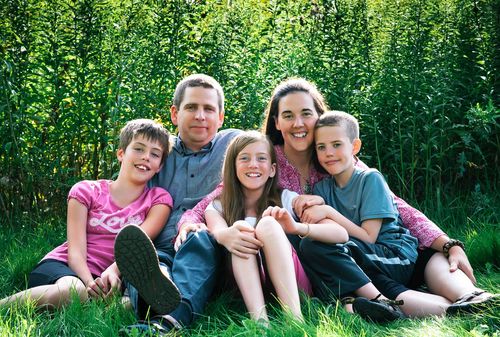 At my peak I was down 35lbs.  5 of that has crept up again since Thanksgiving, when I stopped carefully tracking my food and decided to indulge.  The holidays are mostly over though and I'll be back to it in the new year.   I treated myself to a fitbit for birthday/Christmas, so I'll have a fun little toy to play with to help me stay on track.  I'm trying really hard to make it about health and not weight, but I'll admit that I'd like to lose a bit more before I get to maintenance.

It hasn't all been sunshine and roses.  There are still days (most) when I don't want to run, or work out, or do anything but nap, but if I can make myself do it, I always feel better after.  The depression didn't run away, never to return again (alas).  I never thought it would.  November was tough.  December was tougher.  If history teaches anything, January and February will be harder still.  But March will come.  I've been through worse, and I know it gets better.

And for my birthday I tried that sweater I love back on.

So I write this on the Eve of a new year.  Tomorrow I won't be a new me, but I'll be a much different me than I was the year before.   To celebrate I've signed up for the Resolution Run, a fun 5K to start the new year off right.  It's not something I ever thought I'd do or even want to do, but it's a marker of a sort, something tangible to look back on and say that's the year I found me again.