Immediately after coming home from Guide Camp we dove into a week of Vacation Bible School. The local Presbyterian church hosts with support from the neighbouring United Church and friends from the community all pitch in.  Everyone is welcome, and the class I taught had catholics, mormons, united, baptist, presbyterians and kids that happily admitted that they don't go to any church.  I'm pretty sure there were more denominations present in the other classes; didn't matter.

Our kids went last year and had a great time.  This year I was approached by one of the organizers to help out as a teacher and I optimistically said yes.  I had NO idea what I was getting myself into! I had dropped the kids off last year and only stayed to watch a bit on the first and last days. Having never attended such a thing as a child myself, I wasn't really sure what the lessons entailed or how much planning was involved.

I worried needlessly (I usually do).  They were super organized and I had a lesson plan for each day with freedom to tweak it as needed.  I was really only responsible for my lesson and supervision, the games were run by a bunch of teen volunteers, the crafts were prepared for us and just needed my guidance...all was well.  Plus my class agreed that we had the COOLEST classroom ever--couches and a big comfy chair and a coffee table; it was more lounge than classroom and we felt very special.

The Boy had decided that he didn't want to go this year and was trying to get out of it, but we found out just a week before that some of the classes needed to be adjusted and I would be teaching HIS class and suddenly he was good to go.  It was pretty flattering to me as a mom that he wanted me to be his teacher (I don't know how much longer that will last) and I had fun getting to be with some of his friends and classmates.

Our theme for the week was "PEACE" and we talked about all the different ways we could be a peaceful people and accept and share God's peace with the world.  We had a different word of the day each day; Aloha, Shalom, Agape, Ubuntu, and Heiwa and we talked about what each word meant and how we could add it to our lives.  It was really cool and really fun.

On the last day I pulled out my camera a bit; everyone was wearing their VBS t-shirts and having a blast! 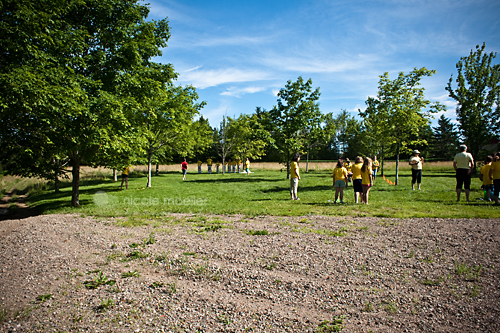 (I let them sit where they wanted and they usually mixed it up pretty good.  I have no idea why, on the last day, I ended up with mostly a boy side and a girl side of the table.)

I have to give a shout-out to my neighbour Barbara from up the road.  On the first day we dutifully got up extra early and drove Hubby in to work so we could have the car, then went to pick him up at the end of the day.  She found out what we were having to do and drove us the rest of the week.  It made our week go so much smoother!  Thank you Barb!

A couple funny faces from my class.  You can see why I had such a fun time.  I hope they ask me back! 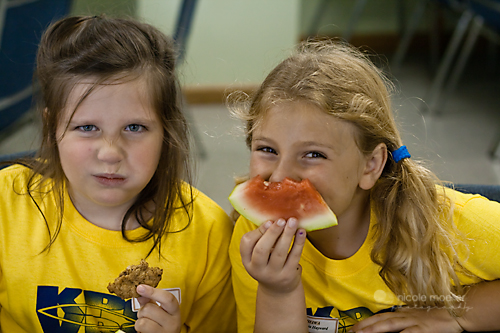 The Princess went this year as a junior leader and got to help out with the Kindergarten class.  She is now in love with those kids and hopes she gets to help out with them again next year.   I think VBS will be on the Summer Bucket List for years to come!

Posted at 11:06 AM in #happyfamilysummer, Current Affairs, Religion, The Kidlets | Permalink