Hot Licks to Beat the Heat

On the Sunday of our week-long visit with Mom and Terry we had a loose plan to check out King's Landing and have some fun time travelling, but we woke up to some crazy high temperatures and humidity and no one much wanted to move, let alone set foot outside the house.  Terry has a medication patch that reacts with the heat and had already kept him from the Strawberry Social the day before, so we didn't want to risk him getting sick again.  Instead we had a quiet, lazy Sunday morning at home (except me, I decided to do some gardening and managed to blister up both thumbs).  By afternoon we were climbing the walls a bit and Mom and Terry had been talking about checking out the music down at the pub.  There were flyers there earlier in the week for a "Celtic/Folk" group and they thought it would be fun to check out.  It sounded good to me (better than sitting around watching Bugsy Malone, which is what Hubby and the kids did) and away we went.

The group was "Atlantic Standard Time" (I love a clever name) and they did a bit of everything; folk, blues, country...and when we mentioned during break that we came for Celtic, they went ahead and threw in a bunch of those too.  They had a great sound and were super friendly and laid back, and best of all, they encouraged us to sing along.  Loved it! 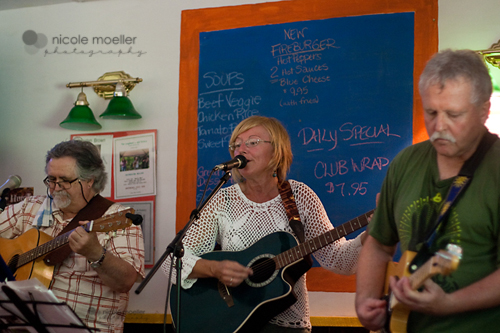 Posted at 10:36 AM in #happyfamilysummer, Current Affairs | Permalink