It has become our family tradition in the past few years to spend Canada Day (July 1st) in beautiful Saint Andrew's by the Sea.  It's such a beautiful seaside town, so warm and inviting to tourists, and they really do Canada Day up right.  It's one of the big highlights of our summers.

Settle in, we had a full day and this is going to be a long post!

We got away a little late this year, by the time I got the picnic lunch packed and all our things together.  Finally, we arrived! 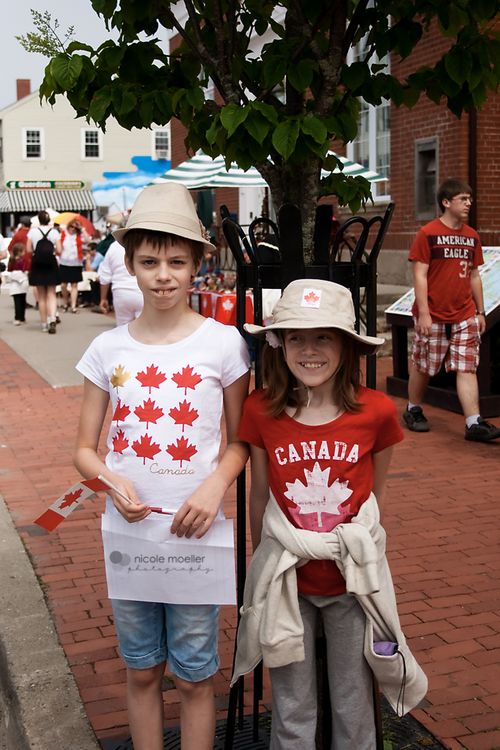 Ok, so maybe they don't look super excited, and the Boy didn't even want to stand still for a photo, but it's just because they're tired of holding still and ready to explore.  (And Sweetpea says the sun was in her eyes.)

Eventually everyone had sheets for the town-wide scavenger hunt and it was time to play. 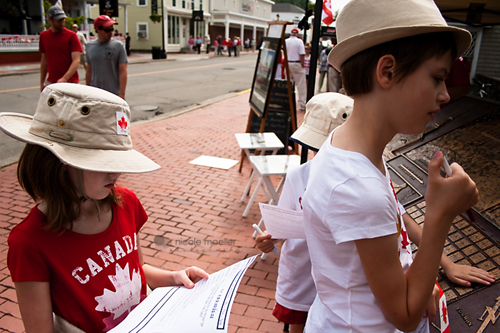 We went around collecting clues and occasionally splitting up (somehow the Princess got last year's sheet, so a few of the clues were different) until it was time for the children's races.  Here's the Boy: 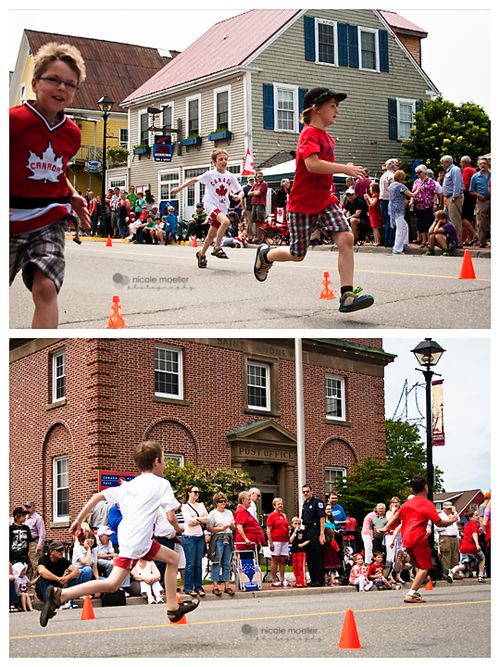 And the girls.  Everyone is delighted that I caught them all mid-flight.  No feet on the ground for these racers! 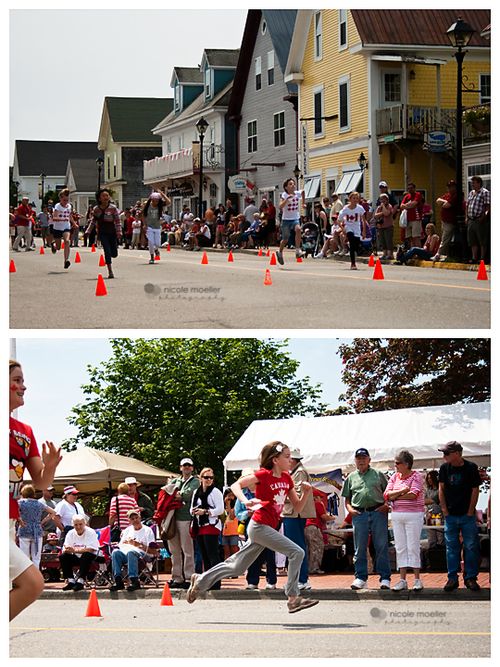 The reward for participation is a voucher for a free hot dog lunch up at the Legion, so we went to collect.  We had to hustle; it was a few blocks away and the parade was starting shortly.  This guy wanted to go before his sisters had even run their heats. 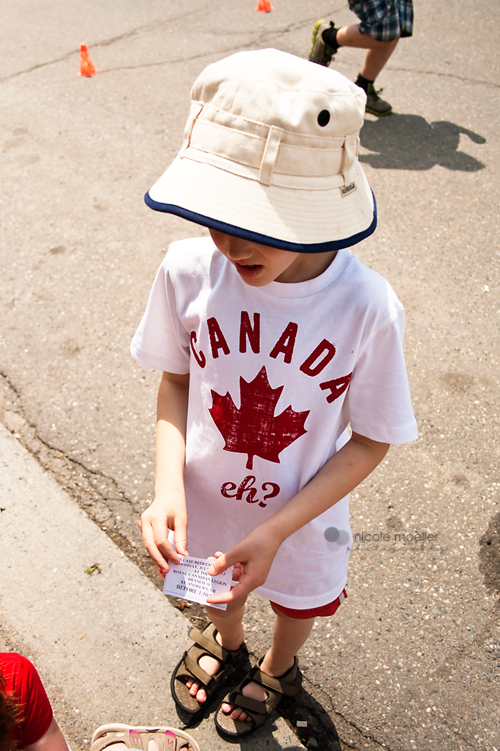 We got back and got settled in for the parade.  By this time the sun had come out BIG TIME and we were caught with no sunblock.  It had been drizzling and overcast when we left home and the forecast was for cloud and rain.  The meterologists got it wrong!

Waiting was almost as fun as the parade.  Lots of people (and pets) showing their Canadian pride! 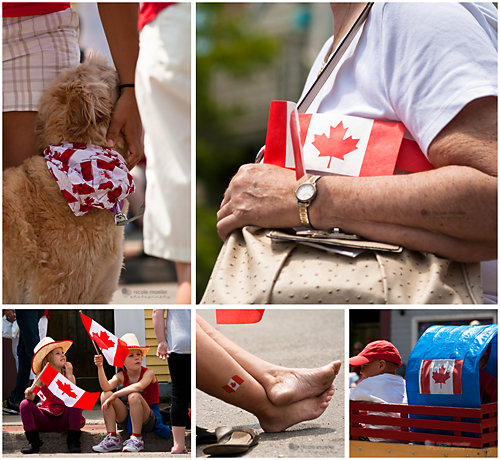 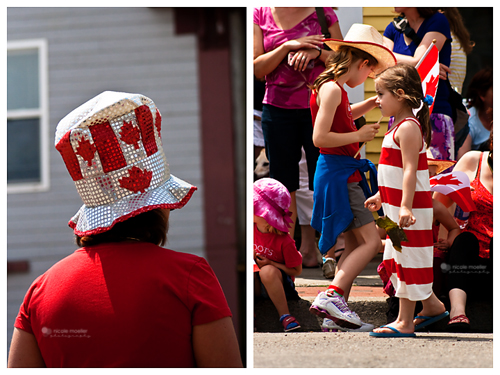 The parade is a modest one, but sweet and keeps that small town feel.  Sweetpea only had one thing left on her scavenger hunt....a signature from a mountie. 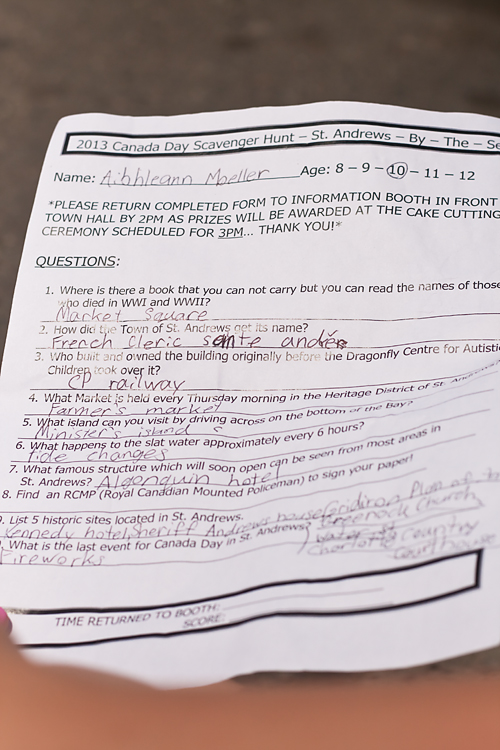 Fortunately, they were at the front of the parade and she wasn't shy about messing with parade formation (yikes!).  Thanks to this RCMP officer for being a good sport! 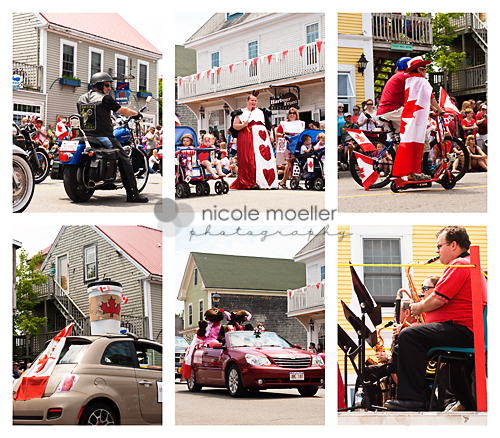 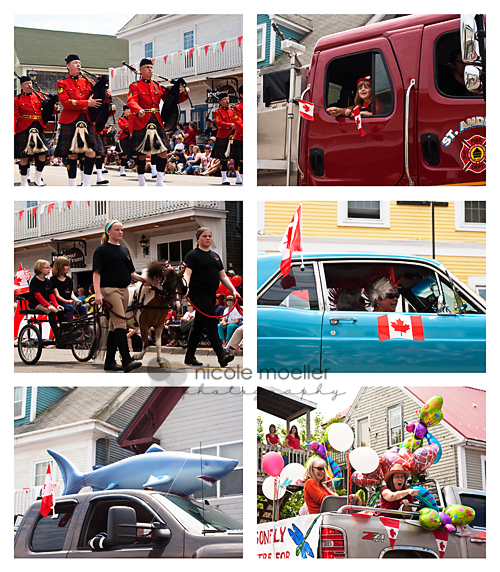 I've been following American politics and policy a little more closely the past couple of years and wanted to share this: That's right, Scouts Canada not only lets in gays, it also lets in GIRLS.  Screening for leaders, but no discrimination.  At all. Back when I was in High School my friends and I actually had an all-girl Rover Crew.  It was incredibly fun.  We went on trips with other (male) troops.  The world did not end, nor were there any shenanigans.  This troop was headed for the big jamboree in Alberta this summer.

Moving on, I thought this group in their kilts was so fun, especially that little guy on the tandem bike.  Oh for cute! 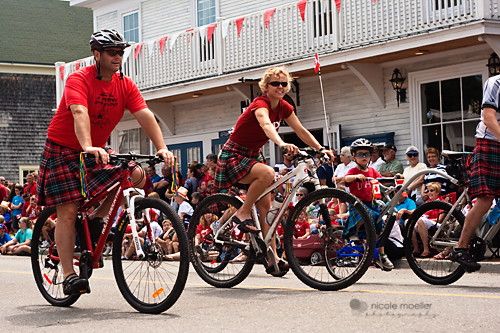 When the parade had ended we wandered the Market for a bit.  We said hello to our friends from The Warrington Farm, the delightful and always smiling Krysta from Morning Sun Pottery, and enjoyed the new offerings this year.  There was a wood-fired pizza truck that had the most delicous looking fare, and a Crepes truck too.  Line-ups were crazy and there was no way we could get close.  We didn't stop to photograph much, but I did snap a shot of a very talented musician. 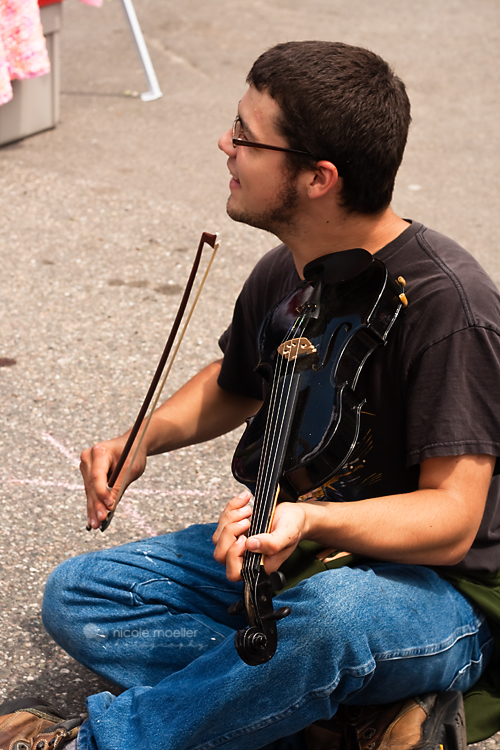 Speaking of musicians, there was a group playing in Sheriff Andrew's house.  With that and the trifle being served it was a happy little kitchen party and I could have stayed all day.  Sadly my children weren't feeling the same; once they'd finished eating they were off for more exploring. 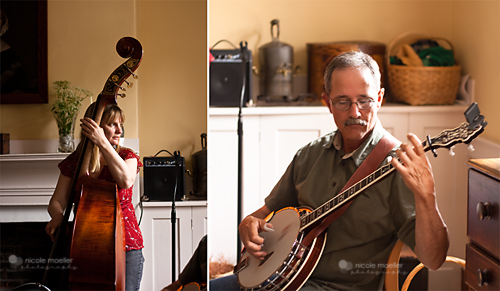 We wandered Sheriff Andrew's house and did the kids' activities in the basement.  There was something going on on the back lawn but there were too many people for us, so we kept going up the street. 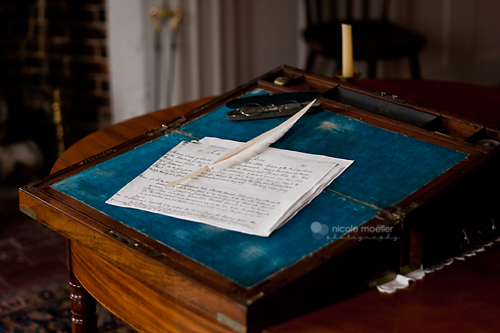 Our next stop was the All Saints Church up the street.  Inside the church are several treasures, including a coat of arms of William and Mary, carved in wood and brought to St. Andrews by Loyalists from Wallingford, Connecticut.  It was also a stop on a Canadian tour by Charles and Diana.  And there's this beautiful Union Jack; 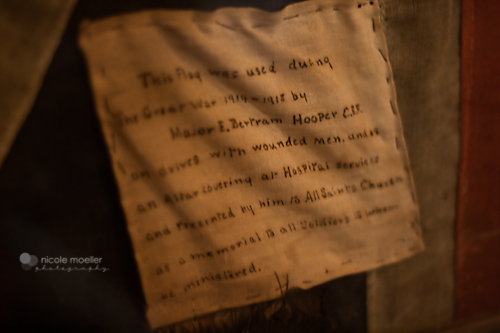 I also love the stained glass in this church.  It's beautiful, and it has some of my more favourite stories... 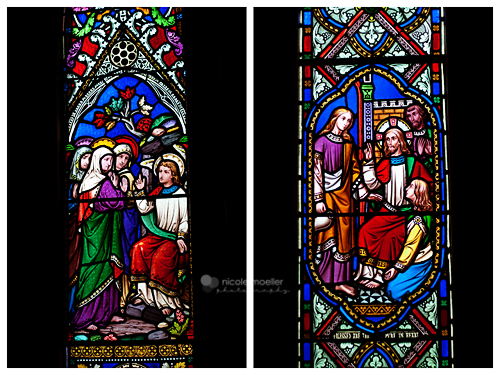 Back outside, we wandered back through the market... 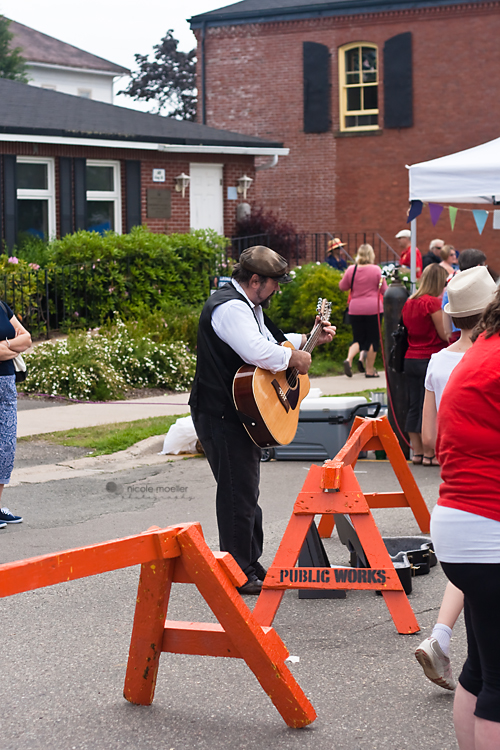 ...and all the way to the pier, where we discovered the tide was out, so we decided to do a little beachcombing. 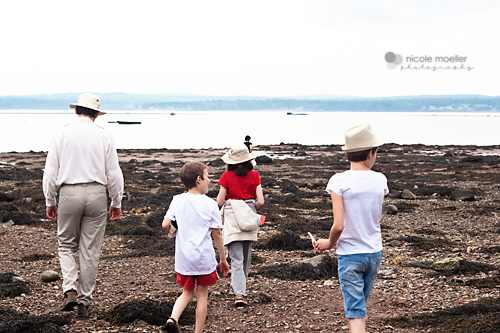 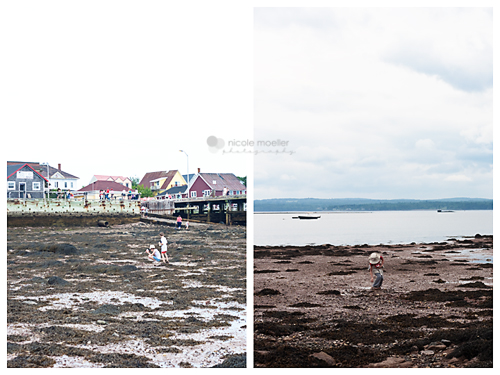 We usually walk out on top of this dock, so walking alongside it was a new level of fun. 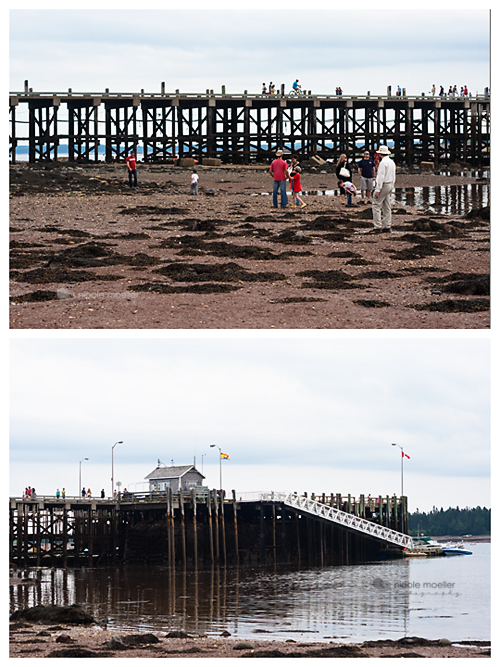 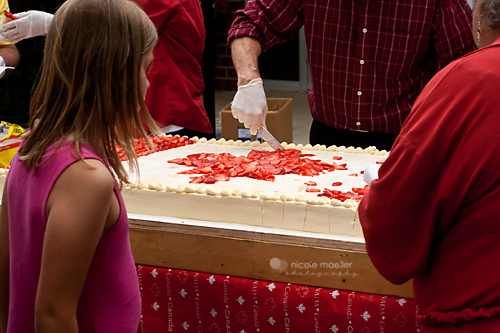 Next stop was the Ross Museum, where the kids did crafts on the lawn while the adults enjoyed some really fantastic music.  I'm still kind of kicking myself for not buying one of this girl's CDs. She had a really lovely voice! 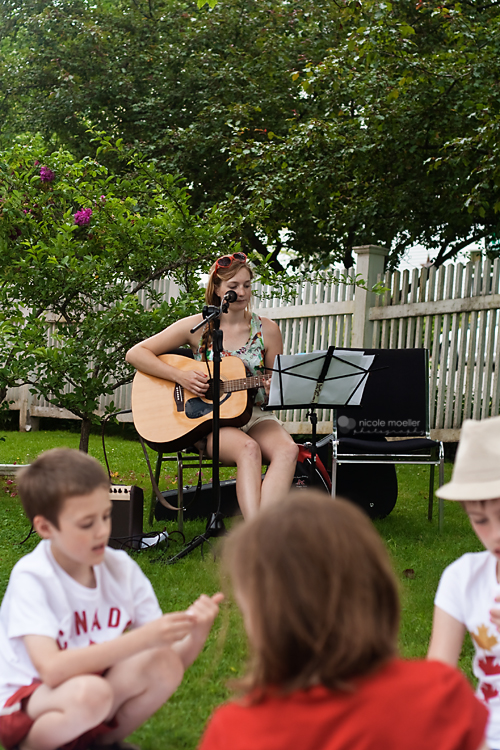 Finally it was feeling like suppertime, so we went up to the blockhouse to change into warm clothes, park the car, and have a picnic.  The kids had some fun playing on the cannons and rolling down the lawn as we watched the tide and the clouds roll in. 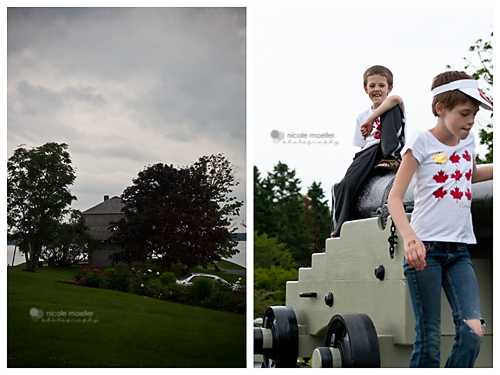 Were we out there just a few hours ago? 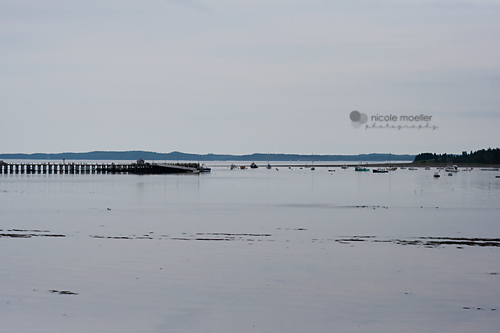 When we'd played for a while we decided to walk into town to kill some time.  We browsed the storefronts, bought some glowsticks at the dollar store, and went to the very awesome children's playground.  At the playground it started raining, but the kids didn't seem to care.  We wandered back to the blockhouse again to claim our spot for the fireworks, wondering the entire time if there would BE any fireworks.  I sat on the picnic blanket in my rain gear and read a book while the youngest two huddled under blankets and raincoats until they fell asleep.  The Princess and Hubby read books in the car.  Just as the sun set it stopped raining and the fireworks were able to go forward.  It took until about half way through the show to wake the Boy up enough to watch though!

With the rain I just stuck with the kit lens this year, but managed to get some nice reflections off the water.  A few more years and I may get the hang of photographing fireworks.... 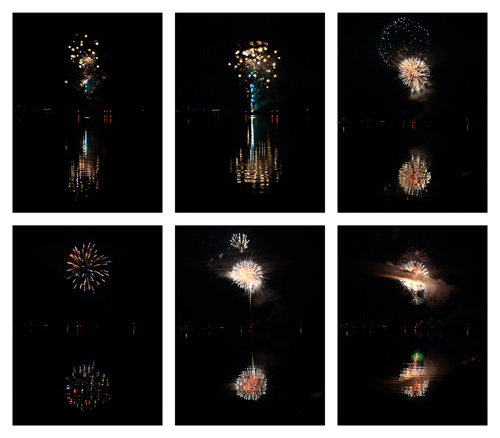 At this point a big cloud moved in....I wouldn't say the show was ruined but it was diminished a bit. 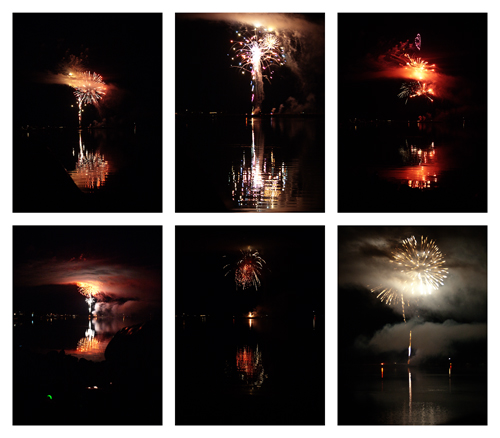 Happy Birthday Canada!  We love you!