One and a half waterfalls

Today was another sticky scorcher, though the clouds were moving in and out, warning of possible thunderstorms one second and revealing sunny skies the next.

We wanted to cross something off of our bucket list, but we didn't want to go far from home and get caught in a storm.

We decided to try to find our first waterfall (we have find 3 waterfalls on our list).  One of the students in the Boy's class did his Triad Presentation on waterfalls and said that there was one quite near us.  His directions were less than helpful though, and when I asked him for better ones he looked at me like I was stupid and repeated himself.  Never try to get directions from an 8 year old!  (To his credit though, his directions were to "go past King's Landing and it's just down the road a bit off Rte 2", and those were correct, they just weren't too precise.)  I found a list of NB Waterfalls through my powers of Googlefu (and promptly pinned it so that we can find it again).  It took some searching, but we found a listing that sounded promising, the one for Lower Joslin Falls, and we got ready for adventure.

To get to the falls, you literally (no, really) park on the side of a major highway.  Yay us!  Here we've parked and we're ready to explore.  Except the Boy says "We don't have to go UP, do we?" 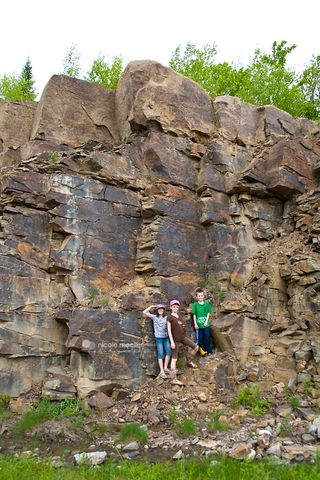 I snapped a quick before photo of each of the girls, since they were game: 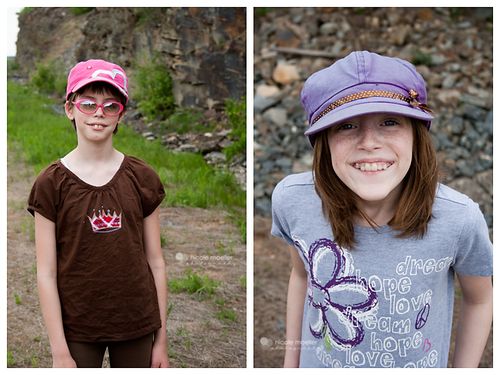 Setting off across the rocks.  We agreed that this probably wasn't a spot we could get any of the grandparents through.  They'll have to just enjoy the photos. 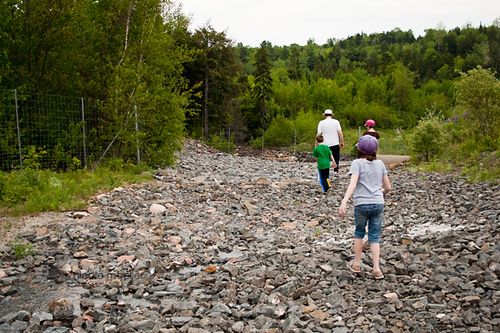 We had to squeeze through a deer gate in the fence (I've secretly always wanted to do that!). 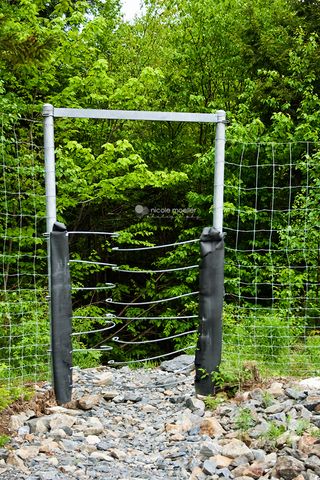 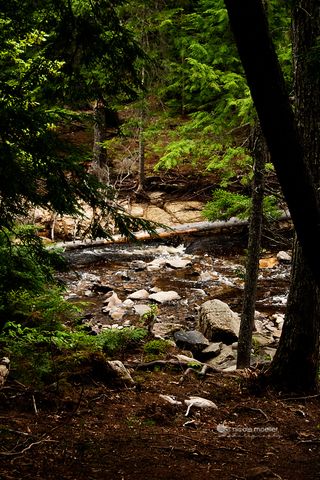 Timidly tiptoeing our way across the creek 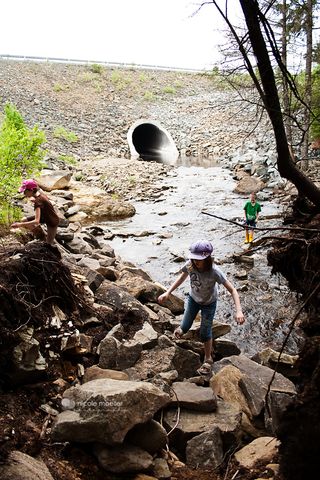 A trillium!  I almost cried.  I haven't seen trilliums yet in this province but they used to be everywhere when I'd go walking in Ontario.  I've been missing them. 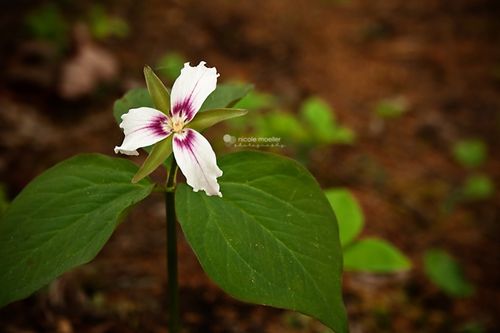 We hear the roar, we're on the correct side of the creek, and this is the "cliff".  Could this be all there is? 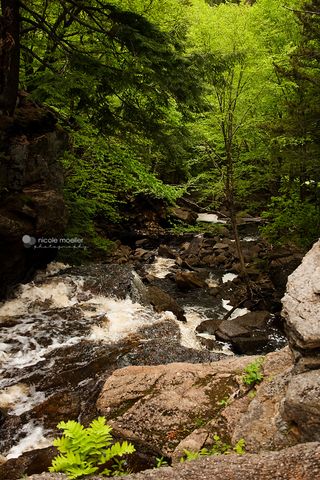 No!  After a tricky walk along the cliff edge we could see the "upper" falls.  Time to pick our way along and down the cliffs to see the "lower" falls as well. 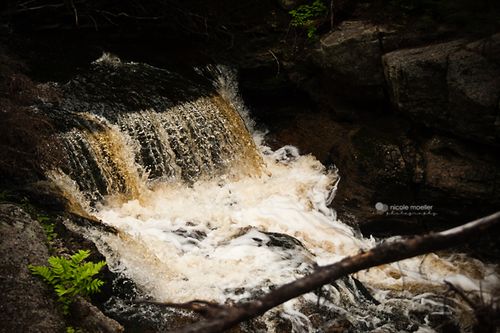 The full view of the falls.  Worth the tricky footing! We started out tentative about footing (and this mom was doing some worrying) but the kids gained confidence as they went.  Crossing the river to get as close as possible to the falls for a good photo: 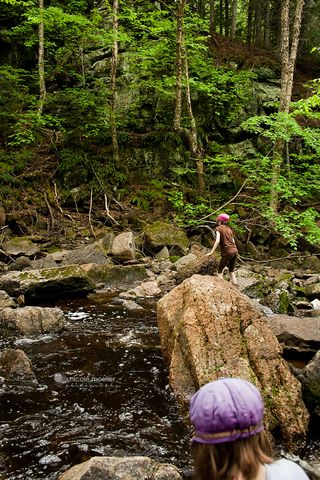 I found a new friend! 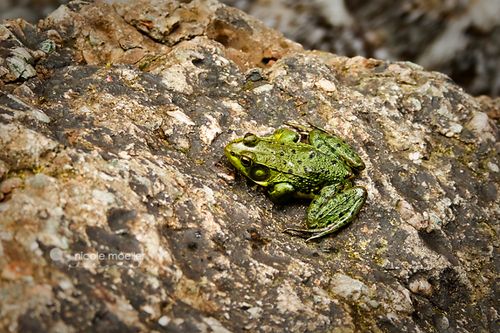 THE photo (thanks kids!) The boy discovers that water on rocks SPLASHES.  Hehehehe. 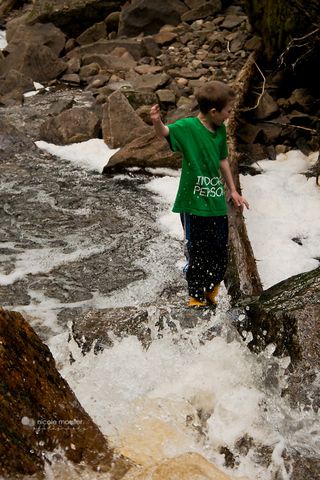 Hubby gets as close as possible to give everyone a context for the height of the falls.  He is exactly 6 feet tall. As it turns out, my kids have mountain goat DNA.  They had a TON of fun hopping about on the wet rocks, while I tried not to turn into helicopter mom. 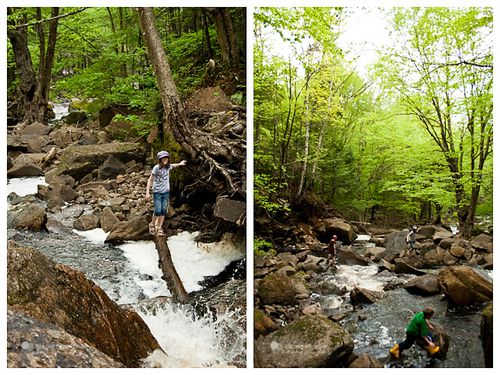 No one wanted to leave.  The bugs were bad, but the cold water felt SOOOO good.  It was really tempting to "fall" in, but we managed to resist.  We eventually convinced everyone to head out.  One last look at the falls from the bottom. 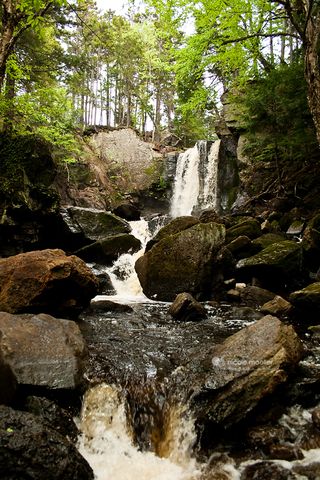 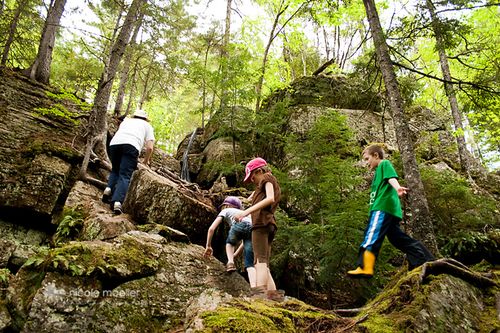 Peeking through the trees from the cliff: 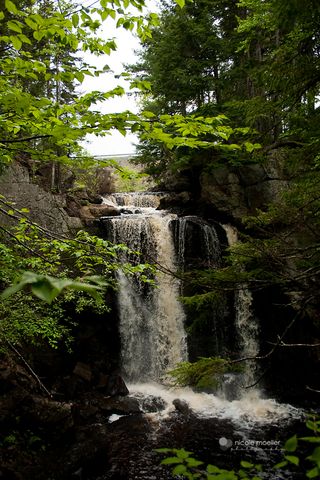 If you look closely at the upper left (top of the waterfall) you'll see why I have so much grey hair: 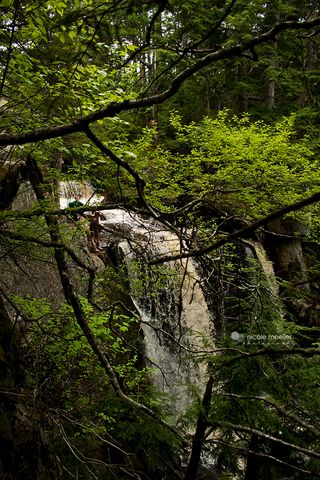 I'm calling this one and a half waterfalls because on the way home we stopped by "our" falls.  They're a little set of rapids just down the road from us and we've always called them a waterfall.  Somehow after our experience with the rush and roar of Upper Joslin though, we just don't think we can call them that any more.  Sorry little water spill.  Maybe some day you can grow to be big. 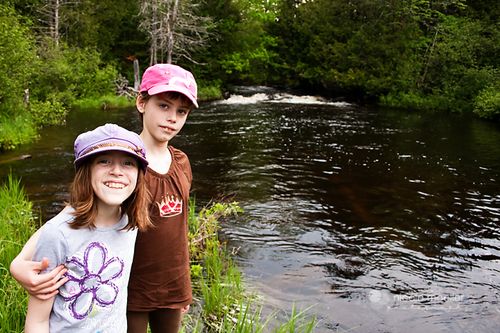 We came home to puddles and wet roads, so apparently it rained while we were gone.  We had a small thunderstorm move through once we were all settled, but the heat didn't break.  It's not officially summer here yet; school isn't out until the end of June, but it sure FEELS like summer!  We're having so much fun with our summer activities and we're excited to pick something else off our list.  Thanks #happyfamilysummer!

Thanks for the great pictures! You sure have a good eye for natural beauty! The kids are really growing and look like they had a blast. Tell Aibhleann I love her boots. Next time we visit if in the good weather you will have to share this spot with us and see how far I can get with my knees.Love you all.

Growing like weeds! You have good eyes to have spotted the boots--I went back and looked and I wouldn't have been able to pick them out! We can try to share it with you but I really don't think you'd get very far. Lots of rock climbing and very steep slopes and wobbly boulders to get here. We're told that Hayes Falls, the tallest waterfall in NB, has groomed trails, both to the base and the top of the falls. I think it's next on our list. It's just outside of Fredericton so not too far away.