1.  The kids aren't home yet, but I'm declaring the first week of school a success.  Everyone is happy to be with their friends again, everyone likes their teachers, everyone is settling in just fine.  Including the Mama.

2. It has been cold and rainy all week, starting with Hurricane Earl on Saturday (no damage here, thanks!).  You may think this is bad, but LAST week we had temps of 30C++ and 110% humidity.  It.  Was. Awful. I'll take the rain for now!  Besides, the weather has inspired me to return to the kitchen, which I had shunned for most of the summer.  Right now I have a big pot of chili simmering in the slow cooker.  Ergo, rain=good.

3.  I finally, FINALLY created chore charts for the kidlets.  I purchased the stickers for said charts over a year ago and kept putting it off.  Dumb!  I fixed them up on Tuesday while the kids were at school and we have success!  I LOVE that chores are getting done eagerly and, most importantly, without any nagging.  Why, oh, why didn't I make these as soon as the inspiration hit?  Right now the stickers are reward enough but I think we're going to work out a rewards system of some sort.  A ticket for a full chart?  And so many tickets for a prize?  We're still in the talking out stage.  Anyone out there who's got a successful system, I'd love to hear it!

4. I'm going to start the Couch-to-5K program that everyone is talking about.  Tomorrow will be my first day.  Which gives me time to find the cheap little MP3 player we won at a Christmas party 2 years ago and figure out how to download one of the podcasts that are supposed to help you.  Because my watch does not have a timer and I doubt I'm coordinated enough to run OR walk while watching my wrist.  If I make it through the 9 weeks without dying I will buy myself a new pair of sneakers, because I still have the pair I bought in high school, some 15 years ago.  Which tells you much too much about how little I exercise.

5.  The Book of Stories class has started at BPS.  It's only day 2 and I love the way it has me thinking and reminiscing and just feeling good.  Love it!  There's still time to sign up if you're interested.  I'm also considering taking Cathy Z's, Me: The Abridged Version.  Not because I particularly care about the class, simply because I'm a total CZ groupie.  Anyone want to try to talk me in or out of it?  I'm on the fence right now.

6.  Because now I'm on a roll.  The leaves are turning.  One of my trees is almost red.  I know I say this every year, but doesn't seem to come earlier and earlier?  We actually first noticed the leaves turning when we were driving to swimming lessons in early August.  What?

7.  A bonus photo.  Because I can't post twice in a row without one. And I've already gone past 5, so why not keep going? 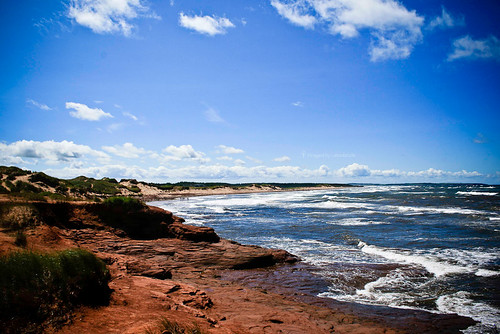 Cavendish Beach, PEI. I'll tell you all about our trip one of these days. I love the island.

8. Have a great weekend everyone!