It's only Day 4 of Picture Summer and I've already been reminded of an important truth:

There is a world outside my viewfinder.

I know, I know--EARTH SHATTERING!!!  Tell us something we don't know!

But often I lift the camera to my face and the world ceases to exist outside what I see through it.  It can be beautiful.  It can be calming.  It can be fulfilling.  It can center you, release you, shake you up and smooth out the rough spots.

It can also be hazardous.

Besides the usual stepping backwards off a curb or bumping into walls that I USUALLY do, even without a camera, it can be hazardous to my subject.

For example, my July 2nd shots.  I stopped at the lake on the way to the library.  I had the Princess with me and had even asked her to change her shirt before we left with a mind to take a few photos.  I had her running back and forth on the shore, kicking and playing and just being silly for me.

It was fun...except...I only saw her.  I wasn't paying attention to what was going on around me.  So we were both shocked when a nice friendly dog, also at the lake with her people, dashed over and jumped her to give her kisses.

The Princess is terrified of dogs*.

She screamed and ran--straight into the lake.  Her hat was left behind and she was soaked and sad.

I felt terrible for not watching out for her.  Her back was turned after all.

Ok, not terrible enough not to snap a photo. 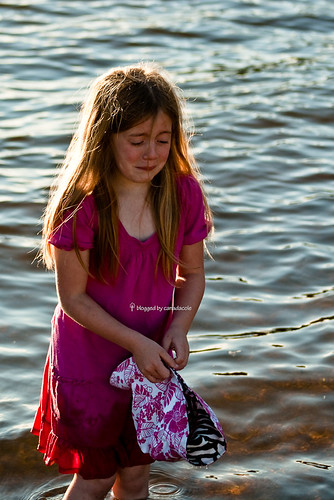 But I totally hugged her afterward.  And then we had to figure out how to get her home, since we hadn't brought dry clothes or even a towel--she was only supposed to be going in up to her ankles.

And then there was tonight.  Tonight I decided to photograph my nightly indulgence--a bowl of ice cream after the kiddos are in bed.  Except, having waited for the kiddos to go to bed, the light in our house was gone.  So I took my ice cream and my camera outside for a happy photo shoot.  I'm not sure which made me happier--taking photos or the anticipation of enjoying my subject as soon as I was done.  I set it down on the rocks that line our garden, took a couple of shots and then--BAM! 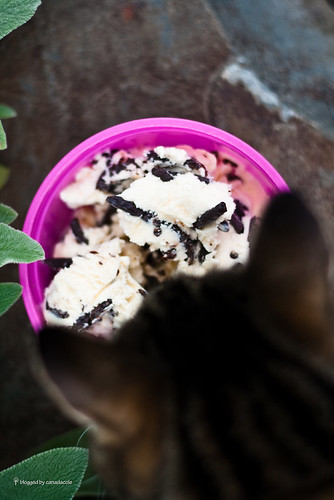 Where'd she come from?

NOT FOR YOU, KITTY CAT!

Of course, if I had been paying attention, she may not have sneaked up on me like that.

So let this be a warning to my fellow shutterbugs--look up now and then.  Shoot with an open mind and open heart....but also open eyes and ears.  You never know what dangers await!

*I know! I grew up with dogs.  Plural.  Dogs rock.  I'm totally a dog person.  The idea of being afraid is SOOOO outside my frame of reference.  We've talked about it, we've visited friends with super sweet and gentle dogs, we've talked some more, but she continues to be terrified.  I'm hoping it's just something she'll outgrow?

I agree with your blog, lucky to read your blog! It makes me have the courage to stick to it!

Good advice! I tend to not realize where I am, where I'm standing - I back up into people, potholes, etc. Looking through the viewfinder can definitely be "blinding."

I get behind my camera and the rest of the world is gone. Poof. #picturesummer