Pride with a Disney-esque Twist

To say she was nervous would be an understatement.

To say *I* was nervous would be an understatement.

I gave her the pep talk.  You know the one, the "I'm proud of you no matter where you place, just for getting out there and doing your best".  And you'd better believe that I meant every word.  She's so much tinier than everyone else her age--and did I mention that she's the only Grade 3 from her school running this season?  As far as I was concerned, she was already a winner and I was already crazy proud of her.

The day started gray and rainy.  I wasn't sure of the exact location of her meet.  I mean, I know how to get to the town, but after that I had NO idea where I was going.  I tried Google Maps but "campground in X-town" didn't yield me any directions.  I figured I'd get to town and drive around a bit.  If I got really lost I could always stop at the elementary school and ask for directions.

As it turned out though, there was plenty of signage and I was there in plenty of time to wish my runner luck and find a good vantage point.

It actually might have been worth it to get lost.  The entire drive I had to be careful not to go off the road, I was spending so much time gawking at the scenery.  Once I got there I was in love.  I MUST do some portraits here. 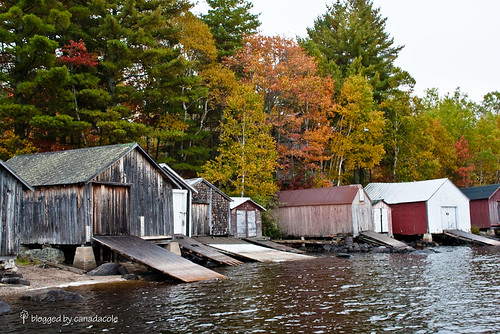 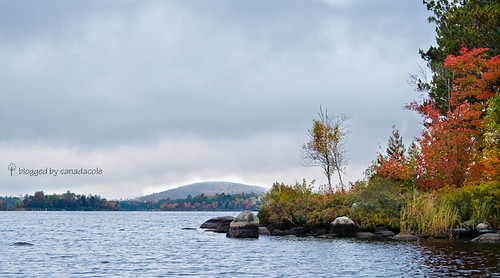 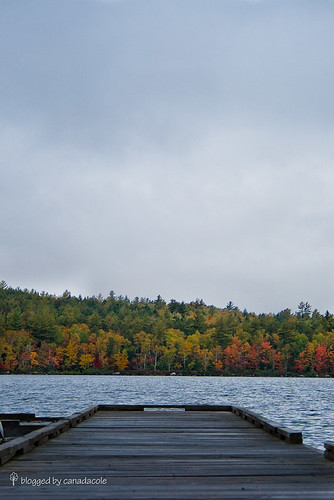 But I wasn't there for the scenery!  Time for the race!

They started the run by going up a hill that would have had me quitting right there.  She was cheered on by her schoolmates though and kept those little legs pumping.  Actually, the advantage to being the only representative in your race is that the entire school then gets to chant your name.  Heady stuff, though she was blushing from the attention.

Then they were away around a big loop... 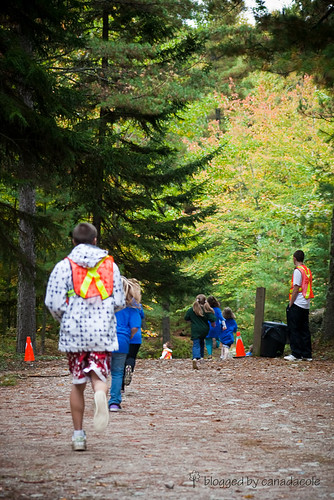 (We're the green shirts, other school is the blue shirts.)

When they finally came into view of the finish line I was shocked to see her, right there in the first pack of girls.  She'd not only run the entire course (which was frankly all I had hoped for), but she came in THIRD!!!

The buttons on my coat almost burst with pride. 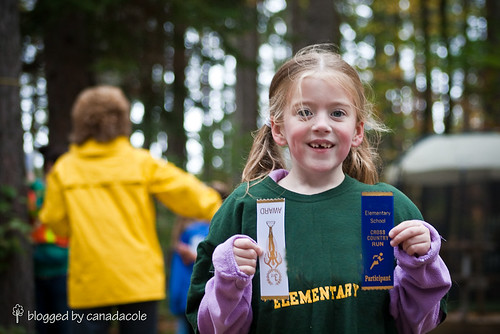 I had her hold still for a moment so I could get a photo of her with her ribbons and her bright red face, then let her go be congratulated properly by her peers and guzzle some water.  I noticed that she went straight to one of the other girls who raced with her (from the other school) and that they stayed together from then on.  As I watched them talking and giggling I was so very, very proud of her for not only running a great race, but getting a new friend from the deal.

It almost sounded like the plot for an after-school special.  You know the ones!

But then it got downright Disney:

After the races were run, I went over to see her and congratulate her yet again (still bursting with pride).  I told her she ran a truly amazing race and she told me that she actually started feeling tired about halfway through and started to slow down.  That's when her new friend, M, smiled at her, told her she could do it, and took her by the hand.

They ran holding hands for the last half of the race.

Once they rounded the last curve and the cheers of their schoolmates rose up to meet them, with the finish line only a few meters away, her friend squeezed her hand and said "Come on!" and let go.  They sprinted to the end, coming in second and third and well ahead of the next group of runners.

Go on, have a little sniffle and a big "Awwwwwwwwwwww".  I'll wait.

Isn't that the sweetest thing EVER!?  I'm about as proud of M as I am of my Princess, and I'm writing her Mom a note right now to tell her so.

Here's to races run and friendships gained.  Here's to compassion and sportsmanship and little girls that show us what true winners look like, no matter what colour their ribbons.  Here's to the Princess and M for making me cry on the drive home. 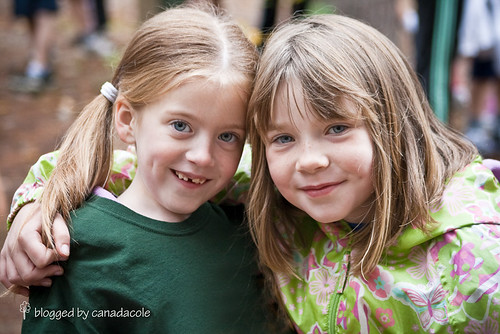 "AAAWWWWWWWWWW" is right! That is absolutely fabulous! I'm so proud of her and I don't even know her! That's quite an accomplishment and having a new friend to boot is awesome!

And... I really wish fall would show up in the South! I'm used to seeing all those gorgeous colors by now (I'm originally from the Northwest). Fall doesn't show up in Alabama until at least November. Those sites you found are beautiful!

Sob! Sniffle. What a beautiful story.
I can't believe you made me cry. At work.

This is the stuff that lifetime memories are made of ! Congratulations, Princess !!! Nicole, for some genetic reason or other, all of our children (even hubby, I believe) did cross country running when we lived in the USA. And they were all good at it. And so is Princess - it is a place where friendships are made and remembered. And where skills are born and honed. Good job !

Thanks everyone. You know, I can't help but wonder if M might not have come in first if she hadn't been holding on to Princess's hand. I'm so very proud of this stranger who became my daughter's friend today.

Okay I'm not tearing up, I'm bawling!!! That is the greatest story EVER! I hope you won't mind if I share it over and over again!

Awwww ! My beautiful grandchildren never cease to amaze me and make me truly proud as does their mother! I was teary eyed reading that and don't tell anyone but even Uncle Tom went AWWW and was grinning ear to ear with pride. Tell her Granma loves her very much and how proud we all are of her here!
PS Your autumn shots are awesome! Love ya all

Sorry I should have added how proud we are also of her new best friend M. What true sportsmanship she has shown and she should get an extra big medal for what she has done. What a great new friend!

So incredible sweet. I'm so proud of princess. Way to be a true star even when things get hard!