For the past few days there has been a decided odour around our house.

The first time we smelt it it came on quite suddenly and I wondered if there would be some roadkill nearby.

(It happened a couple of years ago that a skunk was killed right outside our house.  That's when we learned that no one comes to collect roadkill around here, unless it's really big.)

The road was clear in both directions though, and the smell wafted away after about half an hour.  We decided that wherever the little stinker was, he (or she) was just passing through.

But it kept coming back.  Usually early morning or late evening, we would smell it through the open windows.  Now I LOVE country living, but the clean, fresh air was neither clean nor fresh.

And then yesterday it happened.  I came downstairs, opened the blinds and... 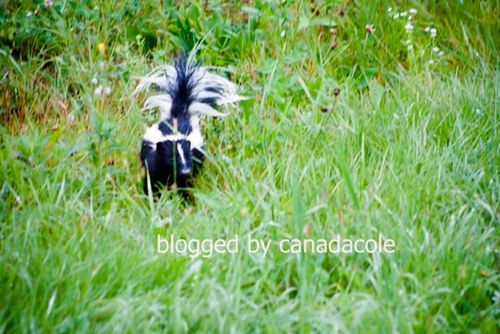 There he (she?) was. I grabbed the camera and took a few rushed shots as the kids gathered around the window to watch.  They agreed that OUR skunk was the cutest skunk ever and we watched to see which way he/she (let's go with it) would go.  We expected it to toddle off into the woods, but instead it went over to our old barn and squeezed its way in.  Oh yes.  OUR skunk is living in OUR old barn.

So, cute or not, opening the windows some mornings will make your eyes water.  It fades away but I'm not fond of the idea of having a new friend who is so aromatic.

What do you think we should do?  LIve with the little cutie, or pick up a trap so it can be relocated?  I have to tell you, my dad used to have a trap line and I remember catching a skunk once.  When we came for pick-up it was NOT happy to see us and neither was my mom by the time we came home.  I've ticked "being sprayed by a skunk" off my life experience list and I've no desire to add another tick.

Aye, NOT good! When I was bleaching my face last night, long story, I smelled skunk and really wondered if it was the bleach! I was FREAKED OUT! But now, it was a little buddy outside our home somewhere as well so I feel your pain. If he's really living in your barn? I say trap him and get rid of him otherwise you're whole place is gonna stink forever. Good luck! And awesome picture!!

A couple of things to consider...what happens if ler skunk is a female? You could end up with more skunks than you know what to do with..even if they are cute( baby ones are adorable but carry Momma's perfume until they are old enough to have their own). Also don't forget about Sasha. What happens when they meet. Best bet is to have it trapped humanely and relocated to a new home. I can't help but wonder if your friend has picked out it's new winter residents. Cute luck kiddo...keep us posted. Love ya Mom