Over the past couple of days I've been receiving contact from you.  Some concerned "hey, you're not blogging, is everything ok?".  Some "Where'd you go?".  Even some flat out "Would you hurry up and blog already!".

I'm ashamed to put that out there in the universe, but the universe appreciates truth, and there it is. 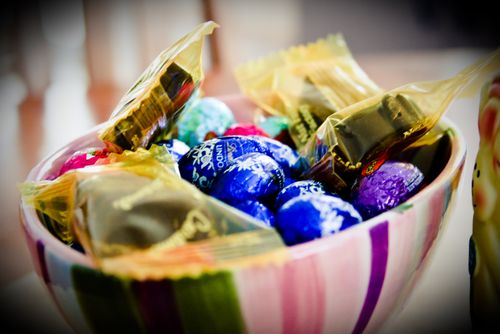 I have reasons.  After I stayed up late to see if I could have a little chat with the Easter Bunny my brain was still ticking along at full steam ahead (probably that disorienting nap earlier in the day) so I decided to read for a bit.  Well, a bit turned into a while and I finally turned off the light around 2 AM.  My brain finally turned off a little after that.  Maybe 2:30?  Unfortunately, my Princess turned on at 5.

I'm sorry, but I need MUUUUUUUCH more sleep than that to be able to function.  So much more.

I tried sending her back to bed.  After she woke her sister I tried confining them to their room, but they were too keyed up.  Quiet was a foreign word to them.  Sleep was not to be had.

So we finally stumbled down the stairs.  I grabbed the camera with the kit lens on.  I tried to focus.  No really, I mean tried.  My eyes still weren't working and I couldn't focus without the camera, never mind with it.  I tried to shoot on Manual, only to discover that my brain just wasn't awake enough to make the calculations required.    I decided to give it up, enjoy the moment, and flip to auto.  It was time to tuck the photographer's hat away and just be mom.

And here is where I just have to say it:

Canon, I love  you so very dearly it's an ache inside of me, but you just don't perform well in low light.  You really don't.  Whatever little chip or whatchamacallit you have inside of you, whatever sensors you have working away, they just go on vacation when the lights are low.  Now I know part of that is my fault.  I know I shouldn't have tried to shoot in low light with my kit lens (though I note is wasn't THAT low!), but you've really got to work with me here.  In this area, you're quite the disappointment.  Even when I realized you weren't helping me, that the shutter speed I let YOU choose was way too slow, even when I tried to make you wake up to reality and switched you to Sports mode (hint--people are RUNNING) well, you totally failed to deliver. Look Canon, I'm not blaming you for the hundred completely underexposed and blurry photos I have from Easter.  Not entirely.  I mean, had I been awake we could have decided together on some different settings.  I'll own that.  But really, I'm a mom.  The light isn't always going to be good, and we've had this problem from Day One.  It's kind of humiliating to have you, all big and burly and beautiful, and then watch the Kodak EasyShare outperform you indoors.

So, Easter.  It was lovely.  The kids were in heaven.  The bunny brought them new Webkinz, colouring books, toothbrushes, small toys, and a few chocolaty treats.  They ran at full speed to find all the hidden eggs, and even managed to miss a few that we found later in the day.  Loot was divided evenly and everyone was happy.  We feasted on French Toast for breakfast, built killer sandwiches for lunch, had a "party" mid-afternoon (where we eat chips and watch a movie together), and had baked ham with a maple glaze for supper.  Eventually.  First I lost track of time and started supper late and so it wasn't ready before we had to run to choir, and....well, again, no one seemed to mind.  It was lovely.  Really lovely.

But I've avoided blogging it, because the photos really are an embarrassment.  But there are some grandparents out there who don't much care, so here are some of the least embarrassing photos, the one's I'll use when I scrapbook Easter from this year.

Each of the kids: 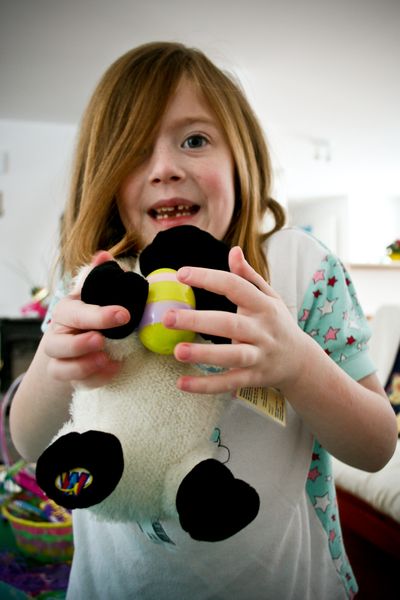 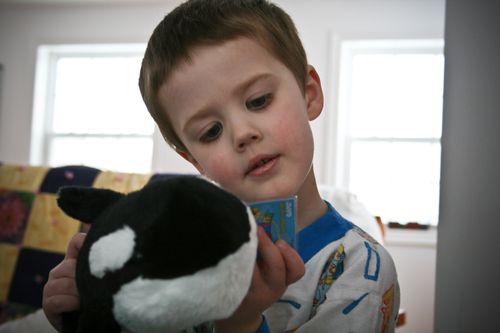 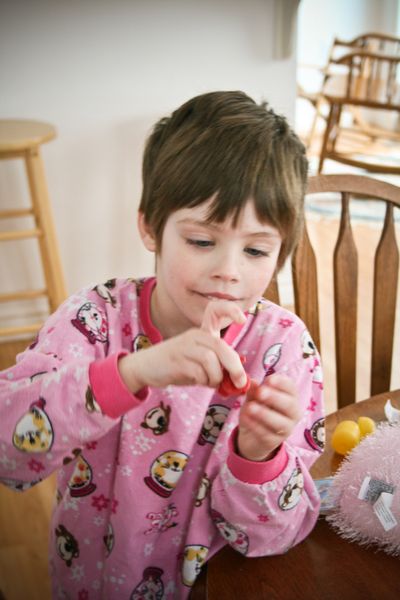 My favourite candid of the day (he's NOT supposed to do that--guess he got a little carried away!) 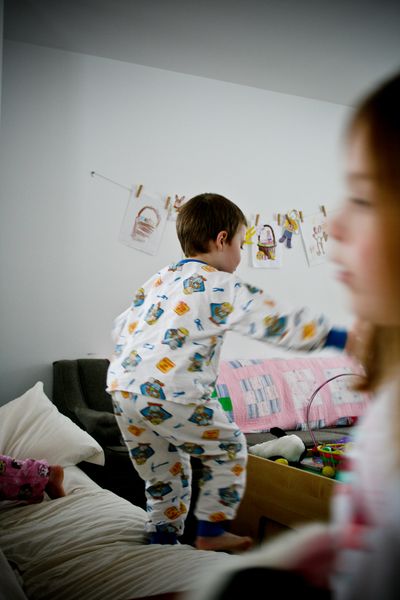 And the great loot divide of '09 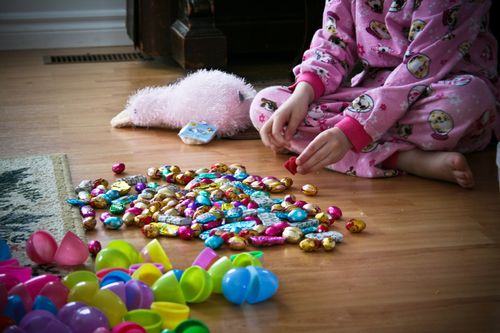 And now if you'll excuse me, I think I might add "Kodak EasyShare" to my photographic equipment wishlist.  You know, for next Easter.

Also, my newly defined benchmark for knowing I've "made it" as a photographer is "can operate camera in the dark while asleep".  It's important to have goals.

Posted at 10:36 AM in Current Affairs, Photography, The Kidlets | Permalink

I love this blog.
You are a cool mom.
Your photos look just like our house on Easter, too. :-) They are great photos, because they say to me, "Look at that love."
They speak volumes about you, and personally, I am touched and awed.

Your standards are way too high. I love your pictures. If I get the kids looking presentable I'm good. But then, you're the pro.