That's what experts from Environment Canada are calling it.  A weatherbomb.  Here's the scoop.

I like the way it sounds, like Mother Nature had just had enough of us and decided to send a message.

It was predicted, but frankly, so have a lot of storms that we never saw this year.  Still, I let myself get cautiously optimistic.  The snow was supposed to start in the "late afternoon to early evening", and I kept peeking out the window.

No snow, no wind.

I was seriously bummed.  I had been looking forward to a proper Canadian blizzard.

By the time I finished watching the Oscars and dragged myself off to bed though, there were light flurries swirling around.  Hope! 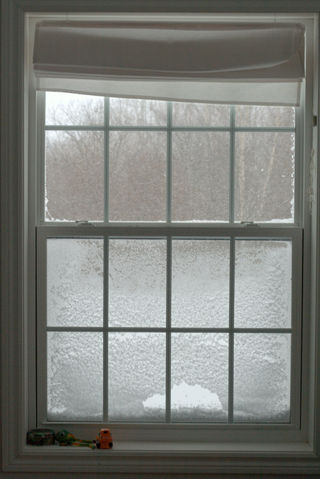 Winter!  YES!  I just love a proper storm!  It snowed and it snowed, it blew and it swirled, and it provided so much entertainment.  We left the radio on and listened to the poor announcer go hoarse trying to read all the cancellations as they came in.  He could have saved his breath: EVERYTHING WAS CANCELLED AND CLOSED.  Even emergency services were running on essential staff only.  At the hospital surgeries were cancelled.  I feel for anyone who went into labour yesterday.  Ouch.  No one was going anywhere!  Hubby hunkered down at the computer and worked from home (which is why you didn't get the storm live blogged--gotta pay the bills!).

When all was said and done, we received 48 cm in 24 hours.  That's on top of the fairly decent blow we got on Thursday.  With the wind, it's all been mixed and mashed and the drifts are insane.  In the city, snowbanks tower over people's heads.  Out here, the farmers were having to wade through waist deep snow to get to the barns.  Plows are getting stuck.

It's probably wrong, but I LOVE it!

At least until this gets posted and I have to go out and shovel.  Blech.  That part I don't love.  Oh, and the part where you can't see a thing when you pull out of the driveway.  You roll down the window a bit, give a careful listen, and then just pray.

Everything else is awesome though!

Here are a couple of photos I snapped.  They're not as dramatic as my city friends.  What can I say?  We just leave the snow where it falls out here, instead of having to stack it up.

Here's our shed, as seen through the window about mid-day.  The snow had not stopped falling yet.  It really shows off the drifting if you compare where the snow is on each outbuilding.  Remember that the bottom two panels are on the door of the steel building.  They come up to my chest.  Can you see them?  Nope!  Gone! 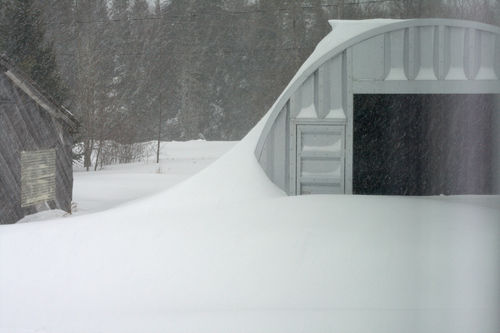 There's our car.  The entire front end was buried halfway up the windshield by the time Hubby went out to shovel. 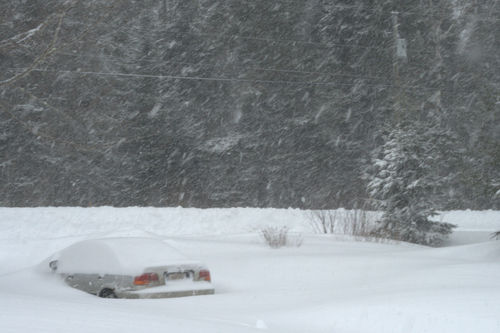 Speaking of going out to shovel, here's the scence when we opened the front door. 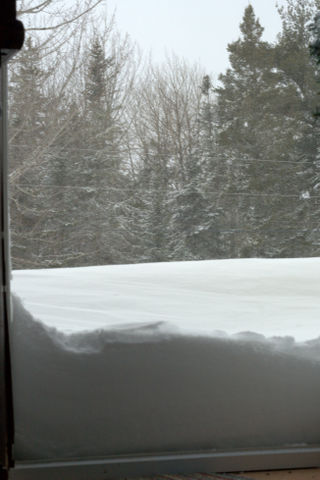 What you may not be able to tell is that beyond that part that drifted right up to the door there is a WALL of snow drifted in front of our steps.  If you could see past it, you would see the driveway, with the car buried.  But...hey, first you have to get past the wall!

Here's Princess standing on the front step after Daddy has shovelled it off.  Please note that our front door is raised and it's usually about a 4 foot drop from the step to the ground.  Not today! 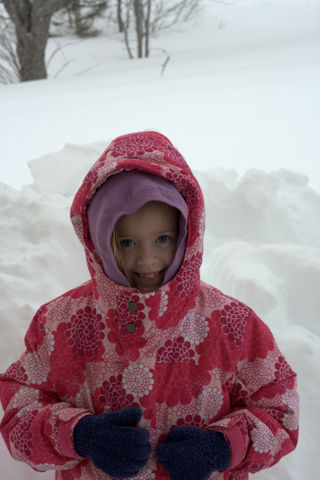 Well, today we have sunny skies and everything sparkles!

You know why else I'm thankful for all that snow?  Because we have NO WATER.  I am now about to fill up a pot with snow to melt on my stove so that I can have a sponge bath and wash my hair.  Then I will use a smaller pot so I can do the dishes.

Thanks Mother Nature for all that pure, pure water!

UPDATE: Got off the phone with the well drillers just as I finished this post. They tell me that our problem MAY be that our well is buried under the snow and can't breathe.  I've been instructed to go dig it out and also dig around it so air can get through the ground.  Maybe I shouldn't go thanking Mother Nature so loudly yet.

Posted at 10:44 AM in Current Affairs | Permalink

Just be thankful that you didn't have to go to the ER yesterday morning. It was a very dificult undertaking.

Glad you enjoyed your "storm", although living here in Edmonton, and having lived in North Manitoba (and I mean Northern!) I am smuggly not impressed. This is when I get to tell you (and I'm totally saving this story for the grandkids too) that I once had to snowshoe out the second story window of our place to get outside. Yep, its true. Snow that high.
Why do easterns think a couple of feet of snow is impressive? That's routine around here.
Wait, does that make us stronger, or stupid for living here? Don't answer that.
When can I move in? :)