Happy Birthday and the cake that was almost beautiful

On Saturday, my Princess turned 7.  How that happened, I'm still not sure of.  I'm positive that it was only last week that I first held her in my arms.  She was born on a Thursday, and if I'm rememberering correctly, she started talking on Friday, walking on Saturday, headed of to the nursery all by herself on Sunday, painted me a picture on Monday, started Kindergarten on Tuesday, braved the giant waterslide on Wednesday, became bilingual on Thursday...and on Friday we had a little party to celebrate her 7th birthday.  I might be a little mixed up, but I'm sure that's what happened.

She requested a cake with white icing and roses on it, just like she'd seen at the grocery store.  With this evil cold, I actually stood staring at those bakery cakes for a while, thinking I'd just go ahead and save myself some effort and pick one up.  In the end though, I remembered just how much the icing from the store hurts my teeth and decided to wing it at  home.  I baked up a nice tall cake in my springform pan, then hit the internet to figure out how to make icing roses.  Google led me to this video:

Doesn't she make it look easy?  She doesn't even have any fancy tools!  Filled with confidence, I set off to do the same.

Did you know that what KIND of icing you use really does matter?  I was using a cream cheese icing, chilled, but apparently still too soft.  My roses drooped right off my little pencil and the scissors turned them into a scary, scary mess.  I settled for making flower blobs, just as I would if I were attempting to paint (another talent that passed me by).  Here's our little cake: Here is a close-up of the "flowers": You can thank Cali Girl that there are pictures, 'cause I definitely wouldn't have posted them without pressure.  The girls were delighted though.  I'm so lucky to have such generous critics.  According to them the cake was "almost beautiful".  Nice.  Plus, every cake looks better once the lights go out: 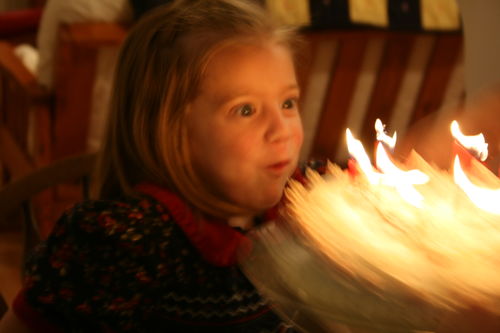 The menu was pancakes, and though I also cooked up lots of bacon and had fruit to offer, everyone just wanted to get through the pancakes and on to the cake.  Fair enough, I suppose.  Presents were a much requested TY Girlz from Grandma (I'm still not sure I like these Girlz, and not just because of that ridiculous z at the end, but I can rant about that later) and a very lovely Snow White costume from the family.  The Princess has caught on to the fact that having a birthday near Hallowe'en means you can ask for a very fancy store bought costume as your gift instead of getting homemade or second-hand offerings.  She's a smart little Princess. She also had to try it on right away, over top of her dress... 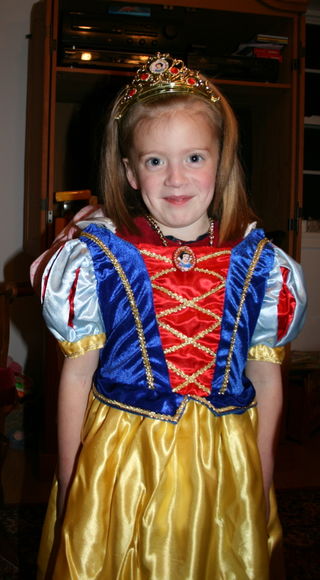 It was a happy Princess who headed off to bed that night, to sleep away the last minutes of her 7th year of life.  And an emotional Mama who's still trying to figure out how that sentence came to be her reality.

Posted at 12:43 PM in Current Affairs, The Kidlets, Yummo | Permalink

Seriously, you are such a great writer. It's like I was there in your kitchen with you and when Princess went to bed. I have a sadness in my heart that she's so old. My kiddo carved his own pumpkin all by himself yesterday and that bothered me so I know how you're feelin'. Anyhow, props on that cake! Mine would have looked like finger painting gone-wrong so you win! And your low-light picture is still SUPER cute!

I happen to think your cake was very nice. Who says flowers have to be duplicates of some magazines' photos. I happen to think your "modern" hip looking flowers are cool! Obviously so did the Princess and that's all that really matters! Hope your cld is going away and you are feeling better. Love you