Some years ago, when I was blissfully enjoying my university days, I had a friend who always spoke of his brother in hushed, reverent tones.  This friend was wonderful to talk to, very down to earth, not too cynical but not completely naive either.  I often used him as a sounding board and valued his input, except when he was annoying me in a brotherly-type fashion.  One of the things that annoyed me was this way he had of practically genuflecting whenever he said his brother's name.  How obnoxious.

I got to be better acquainted with the entire family, and quickly noticed that it wasn't just him; everyone used this same reverent tone when speaking of this one family member.  It was both funny and endearing.  Obviously this guy couldn't be the near saint his family seemed to think he was, but how sweet that they thought so, right?

Then, one day, he came home.  I happened to be getting a ride from the university to my apartment with my friend when he mentioned that he had to swing by the house to change and pick up some things.  This wasn't unusual and I was used to waiting, but he mentioned that *The Brother* was home and I'd finally get the chance to meet him.

I smelled a set-up, but I was flattered.  You really think it's important that I meet *The Brother*?  Me?  What a compliment!

Then I stepped in the house. His mom made the introductions and, that quickly, everyone left the room, leaving us alone together.

This was definitely a set-up.

I took a good long look at *The Brother* and he looked normal enough to me.  No halos in sight.  Just an average, maybe kind of nerdy guy.  He seemed at least as shy as I was, and as aware that we had been set-up.  He also seemed kind of resigned to it, like it wasn't the first time it had happened.  We fell into talking and, yes, it was kind of forced.  He had a nice voice though and a soothing manner, and I decided that, since his family seemed to think he knew everything about everything, it would be pretty safe to ask him some questions and let him enlighten me.  Strangely, I don't remember what I asked him or what he talked about, I just remember sitting and listening to him.  And I'm pretty sure my memory must be playing tricks on me, because when have I ever been quiet for any length of time?

At one point the conversation lagged, as first conversations between complete strangers do.  It was then, sitting and staring at him and searching frantically for a new topic, that something rare happened:  I really, truly LOOKED at him, deep in his eyes...and I suddenly knew why his family always used that reverential tone.  Here was someone truly special.  "He's going to make some girl very happy someday" was the only thought I took away from that first meeting.  The peaceful moment was eventually interrupted and we moved on.  Years later, when I'd think back on that first meeting, all I'd be able to remember was the awkwardness of the set-up and that one perfect moment of clarity, looking in his eyes and seeing something special.

I never, in that moment or many after, thought that the lucky girl who married him would be me.  In fact, the first time he called to ask me out I didn't even realize that that was his intent (a funny story that I'll have to share some day).

8 years ago I knelt with this man with joy and a prayer in my heart.  We were sealed in the temple, for time and all eternity.  My family waited outside, unable to enter, but marrying him any other way never occurred to me.  A lifetime with this man would not be long enough.  Some days I'm not sure eternity will be either.  The promise of forever with him is a light in my life that keeps me always wanting to be better, always wanting to be worthy of him and that promise.  I knew who I was before him.  I was complete as a person and had finally become comfortable standing on my own.  With him though, I am enriched and my life is brighter and better. 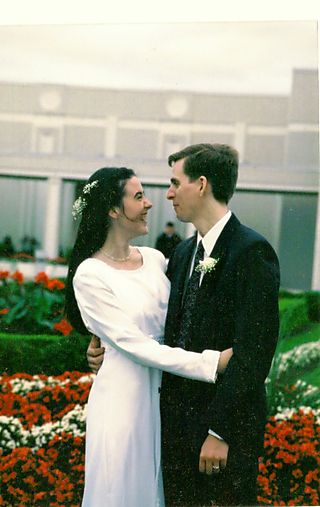 Yes, *The Brother* became *The Hubby*.  Around here he's often Daddy-O, or simply "The Best".

Please forgive me if I lapse into a reverential tone when I speak of him.  He has that effect on people.

And that first impression?  I was absolutely correct.  He makes me very happy.

Posted at 01:45 AM in Inner Wanderings | Permalink

Thank you, Nicole. He is special, isn't he! (happy face)