« So there's an upside to the Maritime Rhythm... | Main | Maybe some peace and quiet will make up for yesterday... »

Let's admit it straight out: I'm a home body.  I like my house.  I like being in my house.  I can go long periods of time happily in my house, not answering the phone, the computer my only communication with the outside world, the kidlets, a stack of books and the tv my only entertainment.  This is happiness for me.

But it's not good for me or them.  Eventually I feel guilty and start thinking that we should get out more.

So with swimming lessons looming on the horizon, I had plans.  We'll be in the city!  For two weeks!  What adventures we'll have!  This is the stuff that memories are made of!  Years from now, when the grown up children get into "remember when" discussions, not only do I want more good remembering than bad, but if this two week stretch features in the flashbacks, I will have done my job.

We got off to a slow start on Monday, so when Tuesday dawned bright and sunny, I was ready to get busy.  We had our lessons, then headed to my favourite Fredericton park for our picnic lunch.  A picnic lunch!  Wahoo!  My kids love a picnic (though by the end of two weeks, not so exciting any more).  We feasted on all manner of picnicky treats and made important dandelion wishes. 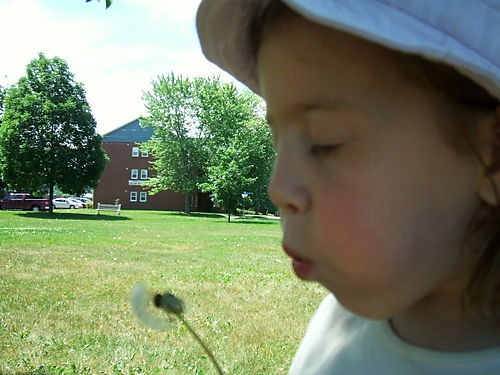 While we were eating, I called a friend, who happens to be the mom of my girls' best city friend, and invited them to come on down!  We packed up our picnic and headed to the other side of the park, the side with the playground.  The girls met their friend, and the boy was having too much fun to care (or look at the camera). 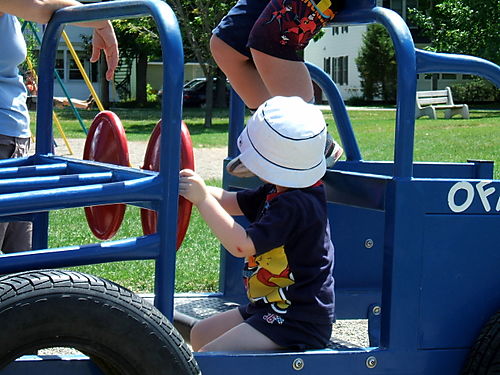 Eventually it got hot enough that they changed back into their wet suits (ick!) to splash around in the big wading pool.  We moms sat on blankets under a shade tree and had a lovely visit while they splashed for hours.  It was fun to watch them mix and mingle, to see how brave they were with only a couple days of swimming lessons.  They loved having their friend there, and since she's very outgoing, they quickly started making new friends too.  The boy looked hilarious in his goggles and came to check in often. Sweetpea eventually came out for a sit, where she found a caterpillar (she is seriously into bugs these days) and then cried as she set it free.  The Princess discovered other people's floating rings and went around stealing borrowing them.  Whenever she'd have to give one back she'd stand in the pool and scan for the next one. I probably shouldn't have laughed, but it was funny and she wasn't actually snatching them from people, just casually sidling up to them and asking if they'd share.  She's got a technique. 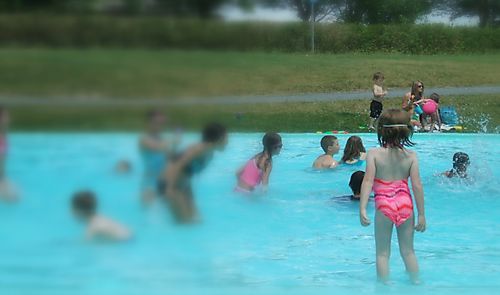 All good things must come to an end though.  Skin gets wrinkly, lips turn blue, ring stealing gets old, caterpillars leave.  We changed back into clothes. almost ready to pick up Hubby, and I had a nice happy mommy glow happening.  THIS, this day of picnics and playgrounds, of old friends and new, of water fun and laughter, THIS would be in the memory banks for sure.

We had some time left and all went back to playing on the playground.

Or did we?  One, two, three...where's Sweetpea?  A frantic search found her back in the washroom.  She just slipped away while I was helping the Boy with something.  I herded her back and now we had one, two, three...where's the Princess?  I spied her on a distant park bench with the mom of one of her new pool friends, eating all of their SunChips.  How rude!  I headed across to have a word with her, but was waylaid by a mom asking if the boy in the bucket hat was mine.  He'd just fallen off of the play structure. 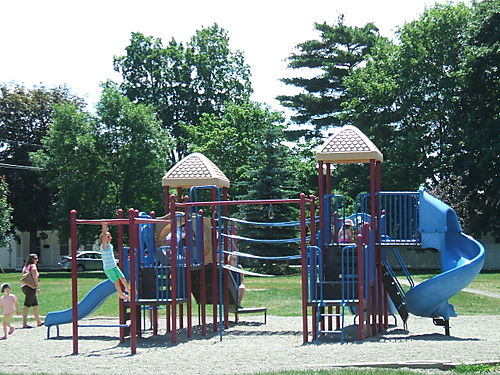 Panic!  and a little annoyance, as she said she couldn't find me and was obviously nominating me for bad mom of the year award.  I'm right here!  I haven't had my back turned for more than a minute!  Apparently the wrong minute.  The guilt started twinging.  When I got there though, he was at the top of the slide, ready to come down.  "Did you fall?"  "Uh-huh"  "Are you hurt?"  "Mama, I'm trying to slide".  Now I was over the guilt and a little annoyed at moms who make mountains out of molehills.  He's fiiiiine.  Can't you see he's playing happily?  Back around to deal with my Princess and her mooching.  And so it went for the next 20 minutes.  One, two, three...where's four?  Why do they keep wandering off?  HOW do they keep wandering off.  My mom glow was fading fast and it was time to go.

We said our goodbyes, though every time I'd find one kid I'd have to go get the other two.  We started back across the park to our car and the Princess suddenly dropped to the ground and started screaming.  Now, it took me an extra second to react because on the way over the first time she kept complaining about how the grass hurt her delicate feet (yes, she was wearing shoes).  There's a reason I bloggy-named her Princess.  The crying seemed real this time, but when I took a look I saw...nothing.  Whatever it was, she seemed fine (other than the noise), so I made her keep marching.  At the car I looked again and....oh, oops, is that a bee sting?  Poor kid.  BAD MOM.  I got her an ice pack from the cooler and a little Aveeno for good measure, but her day was RUINED, and mine suddenly didn't seem so bright.  The two littles fell asleep almost instantly, but she stayed awake long enough to tell Hubby about her worst. day. ever. Before she, too, fell asleep.

At home we got them all indoors and the Boy was extra cranky.  Ok, he's always cranky when he first wakes up, and he spent a full day in the sun, no biggie.  Except that, after checking email, I went to find him and he was curled up on his bed.  Are you hungry buddy?  Thirsty?  Do you have to pee? No to it all, but a quiet little voice says "My head hurts".    I went over to give him a kiss and a pat and then actually noticed his head and the LARGEST BUMP I HAD EVER SEEN.  Right on the back of his head.  And not only did that mom guilt swell instantly to a grand crescendo (judgy park mom was right.  I suck.) but too many episodes of CSI and ER started throwing terms like "subdermal hemotoma" into my guilty mom mind.  I took him to the little local hospital (nurses, no doctor) for an assessment.  Imagine my joy when describing the incident.

He fell off the playground.

How high was he when he fell?  Did he lose consciousness?  How long did it take him to get up?

It was not a proud moment.

His vitals, etc. were fine, but a 2"x3" bump on a very small head meant that we got to spend the night on concussion watch.  I don't know how many of you have had one of those nights, but I never, ever want to do it again.  I begin to see the appeal of making kids wear helmets for everything.  Like maybe the next time we go to the playground.

He was fine, but a week and a half later, I'm still shaken.  That mom guilt is persistant.  Aaaaaaand, when I got back from the hospital I noticed that the Princess had gotten sunburned.  Perfect. 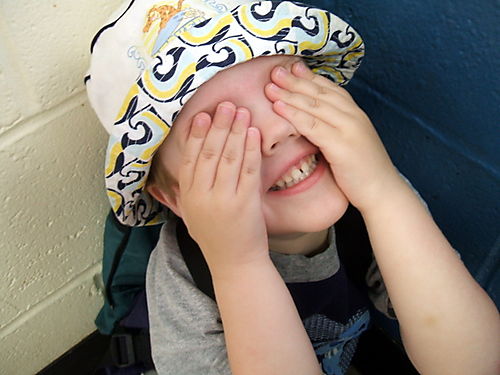 Also, the next day?  As beautiful, bright and sunny as the last?  We went to the library, where chances for injury are much fewer.  I just wasn't ready to get back on that horse right away.

Oh, and I'm pretty sure it's a day that will be remembered.

So, tell me about how you deal with mom guilt?  Do you even feel it?  And how on earth do you keep track of multiple small children on a playground?  I swear I was much better at this with other people's kids.

Posted at 09:38 AM in Current Affairs, Inner Wanderings, The Kidlets | Permalink