You call that a holiday?

We have a tradition in our home that you may have picked up on if you've read this blog much: a tradition of not celebrating minor holidays.  Oh, we recognize them, we wish each other a happy day, we try to do something nice for the person, but we don't go to a whole lot of effort.  It started as a statement against consumerism and has evolved into more of a statement for sloth.

It's actually pretty good that we have such a low base line, or Hubby might have felt gypped in the Father's Day category this weekend.

After the wedding on Saturday I began to put together the Father's Day craft for the kids at church.  We had decided to make this keychain and I had purchased the supplies earlier in the week.  I knew we wouldn't have time to sort things out at church, so I sat on the couch and began dumping bags of alphabet beads.  I had a pretty good system going of sorting the letters needed for each keychain.  That's when I decided that I'd better make a sample one so the younger kids would know what we were doing.  We'll call it inspiration, because that's how I discovered that the plastic stuff was thicker than the holes in the beads.  Ooops!  I needed to make a frantic phone call to someone closer to the store so they could go get something else, (one hour before closing) and I was completely buried in loose beads.  Hubby to the rescue, bringing me the phone and our phone list and not laughing at me.  Happy Father's Day! 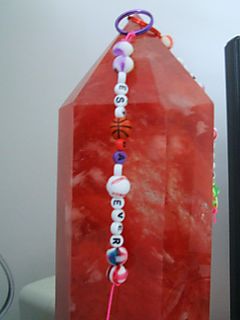 It probably would have been wiser to take that as a divine sign, because the morning wouldn't go much better.  I knew there would be trouble when twice as many kids as usual showed up.  Then the little kids kept losing beads, sitting on beads, trading beads and stealing beads (those sports ball ones are hard to ignore).  Kids didn't like white alphabet beads and wanted different ones (MY kid.  It figures.).  Beads didn't have holes drilled all the way through.  Kids wanted to make bracelets and necklaces and NOT keychains for their dads (My kids again.  Argh!).  We ran out of "D"'s.  And so on, and so on.  By the time we ushered the little kids out and the older kids in I had figured out that this was not a good project to do on a large scale if you valued your sanity at all.  We'd also realized that some dads were going to find themselves the proud owners of a LOT of keychains.  Oooops again!  We got through with the rest of the kids with just as much drama and a little more pushing, as by now I had run out of nicely sorted "Best Dad Ever" kits and the kids were having to make up their own sayings (without using the letter D).


I was so glad when it was over.  Why is Father's Day so much work for Mothers?

Hubby took the kids and his 3 new keychains to the car while I cleaned up.  Or that was the plan.  Kids kept coming in, wanting to make more stuff with the beads.  It started with a really sweet boy wanting to make something for his Step-dad as well as his dad, and how could I say no to that?  Before I knew it I had several kids kitting themselves out with bracelets and who knows what else.  Forty minutes later, I finally had everyone cleared out and the mess cleared up. Hubby and the kids had been waiting in the car the entire time.  Happy Father's Day!

Then, on the way home, a sudden wash of abdominal pain.  I was going to need a washroom.  I was going to need it soon, and it was going to be unpleasant.  Too bad we live 45 minutes from the church, and had just left the populated portion of that drive.  We made it home, but it was touchy.  I had to keep running from kitchen to bathroom and didn't do a very good job of not burning lunch.  Hubby jumped in and made us some chicken noodle soup.  Eventually it seemed the runs had slowed to a walk and I put in a movie for the kids and crawled into bed, leaving Hubby to watch the kids.  Happy Father's Day!

I was awoken by fighting (the girls) and an uh-oh from the Boy.  It seemed that I wasn't the only one with the dreaded D of the day, only he hadn't made it to the washroom in time.  Fun.  I got him cleaned up, then it was supper time.  We played for a bit and I started to settle on the couch with a book when he had another accident.  This time I passed him off to Hubby.  Oh yes, Happy Father's Day indeed!  Hubby tucked the kids in bed and, exhausted, we retreated to separate corners. He played on the computer and I read my book, and that was his Father's Day.

How he handled that particularly crappy day (sorry, I couldn't resist) is just one of the many, many reasons I love my Hubby. He's a really great dad.  He rolls with the punches and does what needs doing without complaint.  He holds hands, gives snuggles and cleans messes with understanding for us all.  I love watching him, the father of my children.  Love watching who they are with him and who he is because of them.

Tomorrow is his birthday, and although he doesn't like to be mentioned on the blog all that much, I hope to give him a mini-tribute post.  I won't be able to get too mushy or post too many pictures without embarrassing him, which would not be the point.  In addition, the kids are planning a picnic (please no rain)and there is cake to be decided on and hopes that the birthday will go better than Father's Day did.  But any day, every day, we love him and would be lost without him. 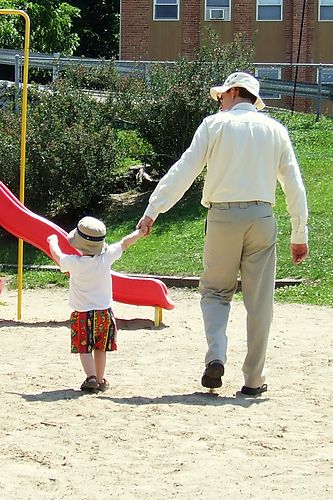 Every day is Father's Day here.

Yuck! I'm sorry your day was so awful, but I'm hoping everyone is feeling improved...