Most of today centered around "The Wedding"  (every time the kids said it it was definitely in italics).  Hair trimmed, showers, new clothes, gift wrapping, travel...and "The Wedding".

"The Wedding" was that of Hubby's co-worker and his incredibly beautiful bride.  We rather unexpectedly received an invitation (I recognized the groom and one other co-worker and no one else) and decided that this would be an excellent opportunity for the kids.  Their Grandma (my mom) is getting married next summer and they've never even seen a wedding before.  There's been lots of wedding talk around our place for a while now, but an actual wedding allowed us to show rather than tell.

Apparently that's good, because the kids showed us that they hadn't been listening a whole lot to what we've been telling them.

First of all, they seemed surprised that it was in a church (Grandma is planning a beach wedding, so perhaps that's what started the confusion).  Then, since it was a Catholic wedding (though not, thankfully for them, a mass), they were thrown off by some of the details.  (They loved the risers though.  If you stand on them, you can see so much better.)  They talked through the service, though they kept it to whispers and we were sitting in the back pew (because we know our kids).  The number one question of the day was "When do we eat?", followed by "Why isn't there cake?".  We didn't stay for the reception, so they never did get good answers to those questions.  Finally, after what I thought was a beautifully sweet, simple service, they looked at me in puzzlement. "That's it?" asked the Princess.  "THAT's a wedding?"  I really have to wonder what was in their heads...

The Boy decided before we ever left that he didn't like weddings, and not much happened to change his mind.  The Princess decided before we ever left that she LOVES weddings (of course) and still does.  She picked her groom out in Kindergarten (poor kid--run!) and that's that.  It might be the dress.  The bride had a gorgeous gown, even if it was white.  Apparently this white thing is a problem for her, as she would prefer to be married in yellow and doesn't think white is a very good colour AT ALL.  I'm hoping she'll get over that.  Sweetpea went with an open mind, swung between boredom and enjoyment, and left with an equally open mind (as usual).  She's been like that since birth and I hope it never changes.

The biggest surprise and enjoyment for the day was when we followed the wedding party to where they were having their photos done so that I could get a couple of shots of the bride and groom.  I was kind of waiting for them to finish with the family photos and get to the couple when the kids decided to start posing.  They ran around gardens and gazebos posing themselves and asking for me to take More! Pictures! A very unusual occurance around here, and one that delighted me.  I'm hoping that a few of those shots turned out (the kids darted as much as they posed, so I'm just not sure).  I'll share next week when I've had a chance to go through them all.

For now though, I'm headed to bed, with a testimony that, with shoes anyway, it's true that you get what you pay for.  These shoes, for example: 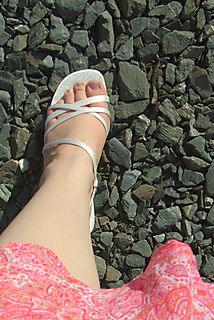 While appearing quite cute in Walmart with their shimmer and their $9.97 price tag--these shoes were NOT made for walking.  (Please look at the shoes, not my horribly short toes.  I can't even believe I'm posting a photo of my foot on the blog.)  The pain caused by a few short hours in these shoes is really unbelievable.

So I'm off to nurse my tired toes and dream of weddings.  No postings for sure tomorrow, as we'll be letting Dad have the computer all day (wait, how's this different from any other Sunday?) and we may have a small gift or two up our sleeves.

Posted at 12:09 AM in Current Affairs, Inner Wanderings | Permalink

I have to say they are adorable shoes! Beauty is pain haha