« Canadian Life: A Portrait | Main | Why all my friends are imaginary »

I love Kindergarten Open House....but it's hard for a mom.

When the Princess attended her KOH I was a bundle of nerves.  She was a very quiet little girl who had been somewhat speech delayed and absolutely REFUSED to have anything to do with strangers.  She was (is) bright (sometimes too bright) and willful and marched to her own drummer. Hubby and I had discussed homeschooling, but as she disagreed with anything I tried to teach her (holding a pencil, correct names of dinosaurs, etc.) and made me pull my hair out, it just didn't seem like the healthiest choice for either of us.

(For the record, she still disagrees with anything I try to teach her, but her teachers are gods and everything they say is sacred truth.  I'm so glad she has good teachers but I still worry.  Every parent worries.)

Anyway, I took the Princess to her KOH and I'm not sure which of us was more frightened.  She clung to me at first, then relaxed and started doing her thing.  Alone of course, with a glare for anyone who so much as looked at her.  She kept wandering off during circle time and at some point escaped down the hallway, but they dragged her back.  A few weeks later, at her one-on-one assessment with the teacher, she sat in stormy silence (the silence used on any stranger) and refused to speak one word.  It made testing next to impossible (fortunately, she would point when I joined her and sat her on my lap, so we hobbled through as well as we could).  Later that day I cried.  My baby, off to Kindergarten.  Was I doing the right thing?  Was she ready?  Was I pushing to hard?  Was I being selfish?  It was a terrifyingly messy time.

Not so this year.  Sweetpea is clever and outgoing.  She loves every person she meets and starts hugging them at the earliest opportunity. We only this winter managed to break her of the habit of running into a waiting room and climbing up on the nearest available lap for a snuggle.  She is a ball of energy, a ray of sunshine, an artist and aspiring author.  She has watched me working with her sister and has picked up on all kinds of things without me specifically trying to teach it to her.   She is already reading and spelling simple words, doing simple math problems, etc., etc.  Frankly, I think she was ready LAST year (except, perhaps, for the way she still dissolves so quickly into tears at the smallest slight or frustration.  Frankly, I did until around Grade 6.).

Sometimes I dream of homeschooling her, with her thirst for knowledge and her brilliant light.  It would be a joy.  I even suggested it to her, but she broke down in tears.  Since Day One of her older sister's school year, she has dreamt of HER start, HER school days.  The cruelest thing to do at this point would be to rob her of that.

When the Princess went to her KOH, we were still unknown in the community.  The school and staff were strangers as much to me as to her.  Now, with Sweetpea, I know many more people.  I consider several of the staff friends, including the wonderful Kindergarten teacher.  I know the school rules and routines, I know several of the parents, the children, the bus drivers.

So last week, going into KOH, picking up on her excitement and glee, I thought this would be a triumphant march of sorts.  It was, in many ways.  She practically quivered with joy as she joined the line to go to her classroom.  She surprised and impressed the teacher when she interrupted the discussion of how they were going to learn their letter sounds to say "That word rhymes with bunny.".  (The word she pointed out on the wall was sunny.  And, yes, she told the teacher that too.)  She gave out hugs and smiles to the delight of all, then she buckled down and gave her entire focus to the art project when it was time for that too.  I was pleased and proud and excited for her. 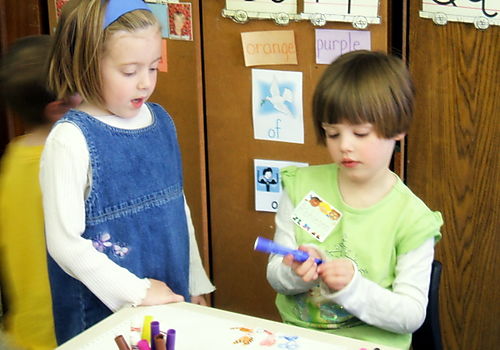 And I was sad for me.

It's hard to let go.  It's hard to imagine my life next year without her running up at random intervals just to catch my eye and tell me she loves me.  It's hard to share all that joy and sunshine with others.  It's hard to worry at night that her ever widening world may someday cause that light to dim in any way, or that her brilliant light, cast out into the world, will reveal shadows that I would pray stay hidden.  In fact, I felt all those wild and crazy mama fears that come with letting go that Big Mama discussed so beautifully in this post.  A post that brings some comfort as well, if you haven't read it yet.

It's hard too, facing the closing of a chapter, the altering of my identity.  I'm not just having to let go of her a bit more, I'm having to let go of myself, or at least some of the labels I've been using to identify myself.  With her sister in school, I still had two little ones at home.  I was, in my mind anyway, the mother of three LITTLE children.  With her off, it'll just be the Boy and I for most of the day, and he'll be at his own KOH next year.  My babies aren't babies anymore.  "I'm a SAHM" is no longer a a complete answer to what I do; people are asking more and more what's next.  They're almost all in school, right?.  I have to ask myself the same question, and I don't have an answer.

So we turn the page.  She is poised to begin an exciting new chapter; a new book in the series that is her life.  I, on the other hand, beginning that new chapter with her, find myself sorrowing over the ending of the old chapter: the best so far.  And while her story is just beginning, I feel that mine is getting closer and closer to the end.

I post this today because we just came from her one-on-one teacher assessment.  She's more than ready.  The teacher agreed that she's ready TODAY and could probably join the current class without difficulty.  She's looking forward to having her next year and already sees her as a leader in the class.  And my heart swelled just that bit more with joy and pride even as it broke a little more at the confirmed opinion that it's time to let go..a little bit more.