Way back in 2005 the Easter Bunny brought a teddy bear to the then 6-month old Boy. 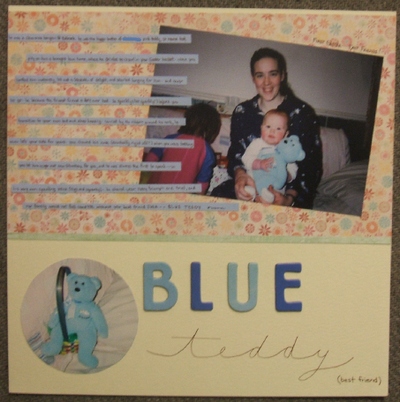 It was the beginning of a beautiful friendship.

The baby boy took one look at that pretty blue teddy and lunged for it.  He held it tight and snuggled with it all morning...and for months (years!) afterwards.  Blue Teddy became his companion, his friend, his comfort, his partner in crime.  Up until that point he would not sleep alone in his crib.  Shortly after Blue Teddy arrived, he happily transferred to the crib and left mom in the dust.  Who needs her?  He's got Blue Teddy.

In virtually every photo taken after that Easter morn, Blue Teddy is either prominent or quietly in the background.  Crawling and later walking, the Boy would hook a finger in Blue Teddy's neck ribbon and away they would go. 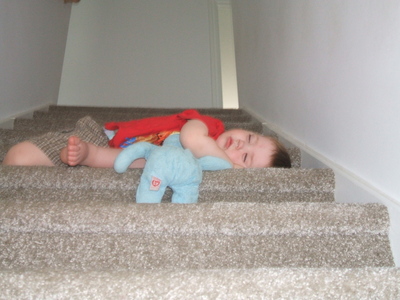 When he began talking, Blue Teddy did too.  There was the Boy's regular voice, a deeper voice he used for Tigger, and a high Squeaky voice that became Blue Teddy's.  The three of them would carry out long conversations and provided us (and the people around us at church) endless entertainment.

During the never-ending days of teething, the Boy ignored teething rings and keys, preferring most of the time the comfort of his best friend....and his hard plastic nose.  He actually chewed it until it was hanging by a thread and then I snapped it off and stitched a new nose (safety!). 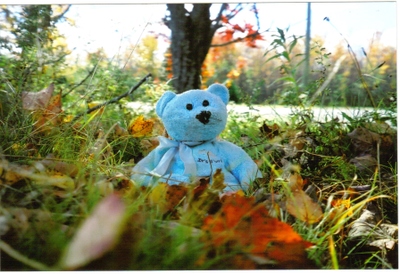 (those of you who know me in real life know that I use this photo of blue teddy as my avatar).

On wash days (and they needed to be every week or so, especially during the nose chewing days) the trauma of seeing his best friend disappear into the washing machine was almost more than he could bear (hee hee) and hanging him to dry was impossible.  Blue Teddy was rescued and hugged and loved as soon as the washer beeped.  We thought about doing the washing at night, but he held much too tight to ever be able to slip Blue Teddy away. 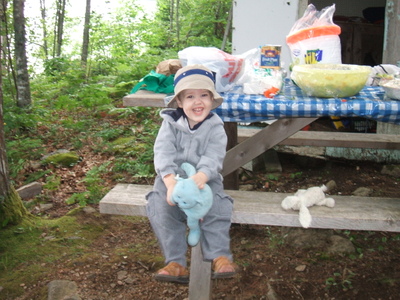 There were plenty of sleepless moments wondering what we would do if we ever lost Blue Teddy, and I have been on the lookout for a backup for years--with no luck (it seems the Easter Bunny found him on clearance).

I have never seen a "toy" loved as much as this bear. I can tell you that there is truth to the beauty of the Velveteen Rabbit story, for Blue Teddy has become real to all of us.  He speaks, he walks, he quirks his head when he looks at you, he plays tricks; he is part of our family.  For me he has become a symbol of the magic of my little boy.  There are times, times when my boy is off playing and I feel he's growing up too fast on me, that I myself hold Blue Teddy tight and maybe shed a tear or two.  Blue Teddy makes it a little better.  He is my son's babyhood made tangible. 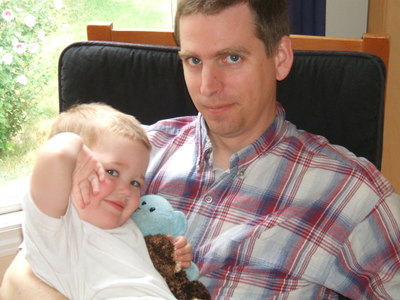 In fact, just this last year, we had a Blue Teddy cake for the Boy's birthday: 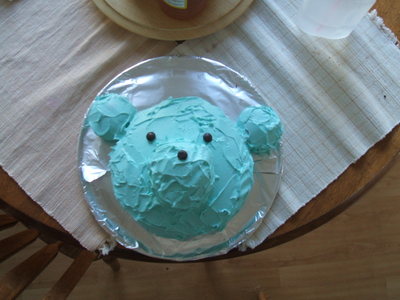 And when it came time to choose what to be for Hallowe'en?  Well, you may remember that there was only one option for the boy: 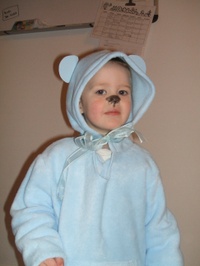 But poor Blue Teddy, he's beginning to look his age.  His soft fuzzy fur is all worn down. His replacement nose is worn away and needs restitching.  Sweetpea cut his ribbon off one day when scissors were left in her reach.  He occasionally leaks little plastic pellets, though we haven't found where they're escaping from yet.  We love him as much as ever, but the boy has been tucking him back into bed most mornings and choosing instead to play with his Webkinz or some other toy. 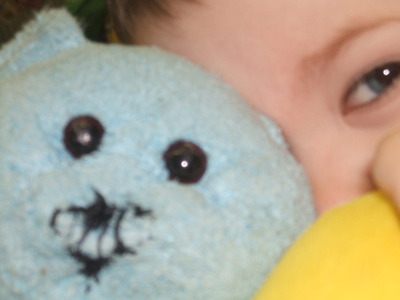 Sometimes the Boy brings him to me to take care of: Blue Teddy needs snuggles but his Boy is busy, so Mom can do it.

Blue Teddy and Mom; fondly remembered but no longer completely necessary.  Maybe we'll end up in a box in the attic together someday. 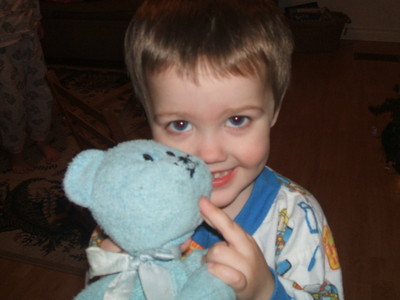 I was shopping for a new top for a big dinner/dance that I needed to attend with dh.  I was at the checkout, standing in line, when a familiar shape caught my eye.

I had to step out of line, but I was caught.

Since I was shopping in Value Village, Pink Teddy was $1.97.

And when I brought her out the next morning?  Well, the Boy and his Blue Teddy went a little crazy with joy.  I hear there's even a wedding planned (they're looking for a "wedding house"). 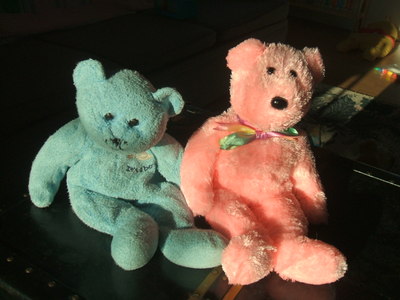 Her name is different every couple of days, but she's part of us now.

After the first couple days of novelty, the teddies aren't playing with the Boy as much, but that's ok.  He still needs them at night, he still loves them, and when he's off doing other things, they've got each other.

I'm reminded that, worn out by the physical demands of loving my family as I sometimes feel, I've got someone too.  We already had our wedding, and he doesn't seem to mind the redistribution of my stuffing.

All of it together?

UPDATE:  The Boy saw this after it was posted and wants a new Scrapbook page about his teddies.  In the meantime, he's showing them his baby album (especially the Blue Teddy page) 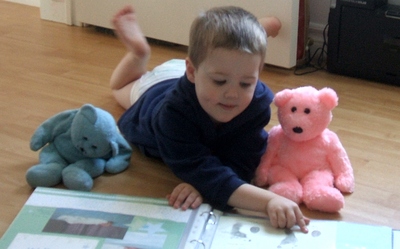 Posted at 10:47 AM in Current Affairs, The Kidlets | Permalink

thats so cute, my son has a bear that looks like a grizzly bear called beary weary & he goes everywhere with him, i did a page about it a couple years ago but i think its time for an update - thanks for the idea :)

That is such a cute story. My youngest had a blanket that was the equivalent of a teddy. It now sits in my dresser drawer, I just can't get rid of it. :)