And to celebrate, we've had another ice storm!

It's also my baby brother's birthday.  My baby brother that was like my baby as I monopolized him from day one: dressing him, burping him, rocking him to sleep; reading to him, cuddling him, comforting him...My little baby brother who is engaged to be married and expecting a baby in July.  Spring just keeps springing up on you year after year.  I'm always thankful for the first day of Spring, but how have so many gotten past me so quickly?

In the spirit of nostalgia and sweet memories of my babies, I chose to use this week's 30-Minute Thursday challenge to tackle some photos I have of Sweetpea's 2nd birthday that I've yet to scrap.  I've been thinking about this birthday a lot recently, because it was the last time her birthday fell on Easter weekend, and here we are again!

I'll admit it, I spent too much time monkeying around with Patterned Papers and went slightly over the 30 minutes.  I'm growing to hate my timer.  Everything was ASSEMBLED in 30 minutes, but nothing had been adhered.  However, when the timer went off I declared the page done as it was at that moment and glued everything down.  Here we are: 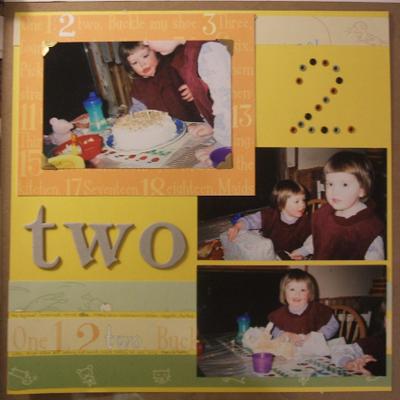 I can see lots more I'd like to do with this page, but a challenge is a challenge!  I ended up cheating a bit and using all my papers from a pack I had from American Traditions (though I played with lots of my scraps first--using up way too much time).  The "two" is Basic Grey mini-mono chipboard, and my "2" is made from MM eyelets.  It doesn't show up in the photo but I used the spaces between the PP to do a wee bit of journalling.  This LO will go in the 2005 family album, and I'll have more detailed journalling when I get around to the LO for her album.  I'm actually toying with the idea of making Birthday Mini-albums, as suggested in the April 2008 CK.  Very cool idea.

Love the 2 made from eyelets! So cute!