Actually, the party went really well.  In our family we try to keep birthdays relatively low-key.  The birthday guy or girl gets to choose the menu and a cake (or any dessert, but everyone always chooses a cake).  They get one or two gifts from the family and that's about it.

Sweetpea immediately knew what she wanted: hot dogs and strawberries!  Then I armed her with a stack of recipe books and magazines and told her to have fun picking a cake.

She knew it the moment she saw it: this cake was the stuff of little girl dreams: 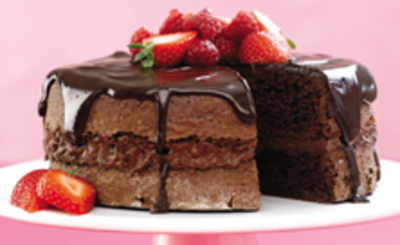 Looks amazing, doesn't it?  Please keep in mind that it was created AND photographed by experts.  I am definitely not an expert.

Well, I found the recipe and it contained coffee.  3 TBSP of coffee.  We're not coffee drinkers, and as the dh was clever enough to note: did we really want to give them chocolate AND coffee ON THE SAME DAY the easter bunny came and expect them to ever go to bed?  He's astute.  That's just one of the reasons I married him.  Being so clever and astute, he also pointed out that she's barely reading yet and certainly spent little time deciphering the recipe.  Can't you just make a cake that LOOKS like that using a different recipe?

Well...why not?  I happen to have a truly decadent chocolate cake recipe up my sleeve, and how hard can a glaze be?

In fact, I haven't posted anything about the birthday party yet because, frankly, I'm still flying high on cake.  Yummy cake.

Another fact of life: if you ask yourself "how hard can it be", you should always expect the answer to be "harder than you think".

EARLY morning, wake up and take hundreds of photos while the kids explore easter baskets and hunt eggs, divide and distribute loot and admire the whole deal.  Make delicious breakfast of French Toast and ALL the fixings.  Eat breakfast.  Clean kitchen.  Make cake.  It's now almost lunchtime, and I'm trying to get the cake in the oven before the horde descends to once more wreak havoc on my kitchen.

So here's the cake recipe.  I originally got it from this ezine back in my university days.

Easy peasy.  This cake is so simple to make.  But I was in a hurry, remember?  Grease AND flour the pans?  Who does that?  I just greased them up really good and skipped the flour.  Some of you already know what's going to happen, but I didn't.  I got that cake into the oven, tidied the kitchen again, and called the kids for lunch.  Fed everyone, tidied the kitchen again, and blew up balloons for the party.

Finally the cake was ready.  I let it cool in the pans for a couple of minutes, then tipped the first pan to slide the cake onto the cooling rack.  Nothing happened.

Huh, that's funny.  I'll just give it a swift shake and out it will come.

It did.  In about 14 pieces.  The noises I was making under my breath weren't actually words, but I think they conveyed my distress and dismay appropriately.  Fortunately there was the second layer, which I gingerly loosened in the pan with a knife and used that same knife to pry it inch by inch off the bottom of the pan.  With a lot of work and not a little prayer it came out intact.  I pieced the first layer back together as well as I could (hot!hot!) and then decided I need to take a nap.  I told dh what was going on and that I needed an hour, then went to my room.

Time outs are great, and this one did the trick.  I actually napped and woke to the soothing sounds of my sweet children fighting and crying.  My time out had been so great that I assigned one to the Princess (who I quickly deduced had been the instigator of several incidents).  Then I returned to the kitchen to make the frosting.  Now the frosting is the best part of this cake.  In fact, don't bother with the cake unless you're going to make the frosting.  The cake is VERY dense, almost more brownie than cake, and THIS frosting balances it perfectly, so pay attention:

Blend until smooth.  Use on Sour Cream Chocolate Cake.

I debated just using the intact layer and making a nice short cake.  I frosted it...and, well, short it was.   I then began using frosting as glue in the painstaking process of putting the other layer together again.

Success is sweet (and so is this awesome frosting).  I finally had two passable layers, I just had to put them together.

You can laugh now.

Having broken into so many pieces, Layer A was now rather larger (and more lopsided) than Layer B.  Not a problem, we'll just make it the bottom layer.  Except that I couldn't seem to get Layer B centred, and did I mention the lopsidedness and that this frosting may have a hold that rivals Glue Dots?

So I have a frosted cake.  A frosted, uneven, lopsided cake.

Internet, I will not lie to you: it looked bad.

I had a little frosting left and I prettied it up as well as I could.  Then I told myself that the glaze would help disguise all kinds of ills.

Have I mentioned that I've never made a glaze before?

I found a couple of different recipes.  The one I had been planning to use had to be discarded as I had just run out of icing sugar.  The second one suggested melting chocolate and evaporated milk together.  I do not have evaporated milk.  I do have some light cream in the fridge.  Will that do?  Also, why make more mess heating them together in a pot when I can just melt the chocolate in the microwave and add the cream?

You're getting ahead of me again.  Stop laughing before the punchline.

Apparently you want to heat them together because otherwise you get lumps.

Glazes should not be lumpy, but this one was.  Also?  A little thicker than it should have been, but I ran out of cream.  (of course)

So I spooned and spread some glaze on the cake.  I'm not sure I improved matters.  Then I added some berries in a pleasing pattern.

You can see for yourself that it in almost no way resembles the model above: 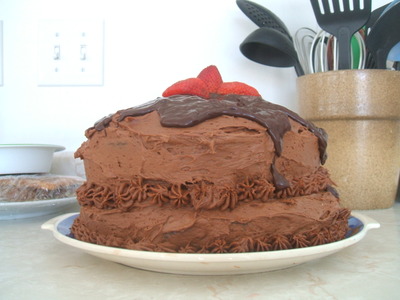 However:  Sweetpea wandered into the kitchen just as I finished photographing the cake.  Her eyes got wide as saucers and there was a looooooong inhale.  Then she sighed out  my cake?  for me?  That was a face of joy and awe such as I rarely get to see.  ABSOLUTE joy and awe.  Followed by giggles of glee and proclamations of love and gratitude.

It seems that I, in my cake-breaking-lumpy-glaze-making glory, am THE. BEST. MAMA. EVER.

So says my middle child.

Also, in that moment, the day was declared the BEST. BIRTHDAY. EVER.

And, for the record, the cake may not be much to look at, but I PROMISE it is absolute heaven to eat.

Posted at 09:54 AM in Current Affairs, The Kidlets | Permalink