I am preparing myself.

I probably should have started preparing myself when one of his very 1st words was "crocodile".  At 9 months of age, that wasn't just astonishing and amusing, it was a big clue.

Or maybe I should have started preparing myself when we went to the aquarium and he wanted turtles at the gift shop, not fish.

There was the way he wore out any clothes with reptiles on them, but we were distracted by his equal love of all things Tigger.  And every little boy goes through a dinosaur obsession, don't they?  Even the girls were interested in dinosaurs for a long while.

Having missed that, I could have clued in when we began collecting Littlest Pet Shop pets and he wanted the turtles...and later the frogs and the gecko.

I wasn't ready to see.

Now we have Webkinz, and after the initial Tree Frog, he's been able to select his other pets. 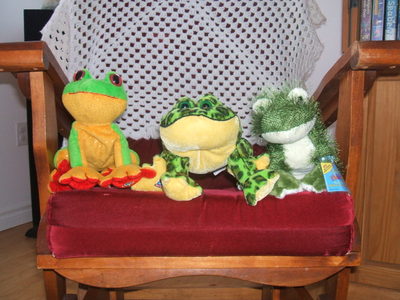 I'm no prophetess, but I have enough prescience to see terrariums in my future, don't you?

*At least these guys are all soft and stay where you put them.  I already had nightmares about escaped snakes last night.

Posted at 09:17 AM in Inner Wanderings, The Kidlets | Permalink