Since I started with the hard confessions yesterday I thought I'd continue today with another one:

Now before all you self-esteem friendlies start jumping up and down with your "There, there"'s, let me explain.

We'll just skip lightly over sports, because with my lack of co-ordination, shoddy spatial perception and general laziness the deck is stacked against me there.  Word games? Cards? Board games?  Lose, lose, lose.  BooMama mentioned today that she never "lets" her kids win.  Lots of commenters chimed in with "me too"s and discussion of how it's good for them to earn the win*.  I didn't comment because I've never had to let my kids win anything.  They beat the pants off of me.  Every time.  And yes, I make them follow the rules!  Every time.  It's kind of embarrassing.   Contests?  I enter many.  So far I have come in second in a "guess the # of jelly beans in the jar" contest in Kindergarten (I still have the little koala bear) and TWICE I won an ARC at the old Romance Buy the Blog and Squawk Radio.  Shortly after each win, each blog was moved to a new format (that I couldn't access) or stopped.  Uh-huh.  Behold the power!

In fact, remember way, way back in November when my team actually won the Tag! You're it! Relay?  The prizes have yet to be awarded because someone on my team still hasn't gotten their LO to Lain.  I've checked with her a couple of times and it's not me...but I can't help but feel that I'm the one who jinxed us.  Did I somehow go out of turn?  Did I mess something up?  Where did I go wrong?  I think it's just the universe reeling at the very idea of me winning something.  If that were to happen, life as we know it would end, I'm sure of it.  I'm just glad that Lain was able to go on afterwards.  I would dearly miss ScrapHappy and don't want to break it.

Now I know, I know, some of you remember me winning a 30-minute Thursday here and there, but if you check the records, you'll see that I only won on the weeks that Lain decided that everyone who played would win a prize.  The participation prize, if you will.  Not quite the same as an actual win.

At this point some of you whom I know from real life will say--but that time we had a games marathon?  And I won 8 times, and she won 3 times, and he won 5 times, I'm sure you won once!  You may be right.  Every now and then, if the stakes are low enough and we all play long enough, I will win one game.  Something about fatigue and the laws of probability.  But then I go back onto a nice long losing streak.  At least it keeps me humble.

So here's my LO from last night for the LOAD Challenge. 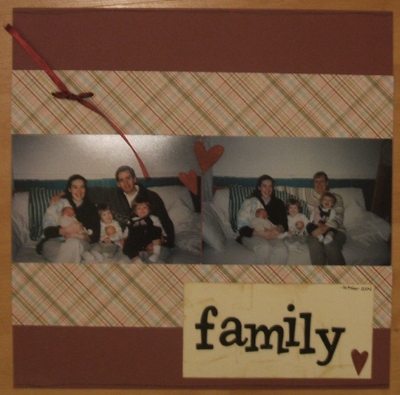 I was having some difficulties getting it uploaded last night and started to have a mini panic attack--it HAS to load!  I'm still in the running for the Grand Prize!  I can't be eliminated now!

And then the voice of reason reminded me that I never win.

But I COULD, I tried arguing with the voice (never argue with the voice).  The number of LOs in the gallery don't match the number of participants.  People are dropping like flies.  You have a better chance statistically every day!

And I slunk away**.  To Facebook, so I could feel better by losing more games of Scrabulous.

P.S.  I married a man who almost always wins.  It's bizarro world.  If you have us over for a party, and there will be games, you should split us up.  He'll be on the winning team and I'll be on the losing team.  If you keep us together we just cancel each other out.

*For the record, I agree.  It's good to win because, well, you won, not because someone handed it to you.  I wish the schools would understand that the same principle applies to grades and so much else in life.  Self-esteem and confidence come from knowing that you ACTUALLY EARNED that grade/trophy/award/raise/bonus.

**After I loaded my page.  For the record, I'm still in the running for the Grand Prize.  You really can't win if you don't play, and I can still dream.

Posted at 11:52 AM in Current Affairs, The Kidlets, Weblogs | Permalink

I, too, am a lifetime loser. I keep checking the LOAD winners every day because I'm always hopeful.

If I remember clearly you did beat me at Scrabble. I too am a "loser" when it comes to games. I start off strong but I just can't maintain it. Every once in a while I get lucky but those times are rare are far between.

I remember winning once too...but after the initial joy (I FINALLY won a game!) I waited in vain for it to appear in my statistics. The last time I checked (last week), it still hadn't. See? It's like the universe will cease to exist if it has to admit to me winning something.